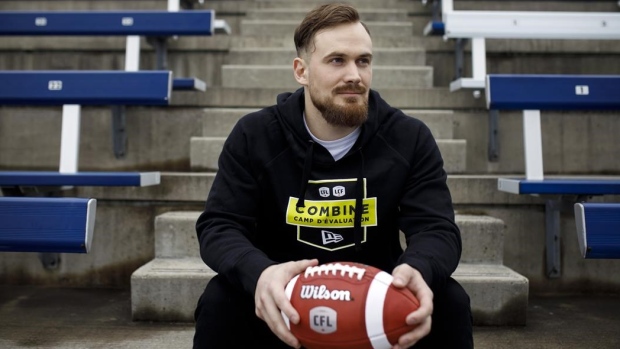 TORONTO — He's coming to the CFL's national combine as a definite long shot, but Frederik Myrup Nielsen has defied overwhelming odds before.

The 28-year-old Danish receiver is one of 18 European players who'll strut their stuff before CFL general managers and coaches this weekend as the league continues its effort to add an international flavour.

It's stunning the five-foot-11, 185-pound native of Aalborg, Denmark, is here at all, considering he was diagnosed with leukemia as a child and doctors were unsure he'd even survive.

"Of course, I know being 28 and going to a combine, it's not the optimal setting," the articulate Nielsen said in perfect English. "You don't really have anything to lose by it.

"And you never know, maybe you're the one who defies the odds. All you can ask for is an opportunity and I've been given that by being invited. Now you just have to make the most of it and hopefully somebody likes what they see and believes you have some potential to help their team."

Nielsen, who speaks Danish, English and German, was diagnosed with leukemia at age three. It was during treatment as a five-year-old that doctors told Nielsen's family to prepare for the worst.

"It went up and down," Nielsen said. "Doctors did tell my parents that if I didn't get better within the night, I'd probably pass away not too long after.

"Obviously it was a little different from a regular childhood in that a lot of my time was spent in hospital with chemotherapy. There was also a lot of lying in bed and feeling bad and being in pain."

Nielsen, who underwent a bone marrow transplant, said eventually he began responding well to treatment and by age seven the cancer was gone. And despite the doctors' pessimism, Nielsen said he never gave up hope.

"I always had the attitude when I was young of telling my mom it was going to be OK," he said. "I guess I was just a happy kid that way, that I looked positively at things.

"Exactly what happened I can't tell you but my body responded well to the treatment and one day I just started getting better. But I'd like to think having the fight in you, believing and achieving a positive attitude and looking ahead also helps with that."

Nielsen grew up playing soccer and participating in track and field before taking up American football as a 15-year-old. He played for the Danish national team at the 2014 European championship and in 2016 was named the team MVP following an exhibition game versus Poland.

For the past two seasons, Nielsen has played for the Potsdam Royals of the German Football League. He was named a league all-star last year after finishing fifth overall in receiving with 62 catches for 1,111 yards and 13 TDs in 11 games, missing three due to injury.

In 2017, he appeared in nine contests, registering 48 receptions for 896 yards and 10 touchdowns. Nielsen feels he can easily adjust to the pass-happy Canadian game, with its longer, wider field and unlimited motion.

"I think I could fit in well," he said. "I feel as a player I've got good hands, I'm pretty quick out of my breaks and at separating and know how to work in space.

"If you give me more space to run routes and get open, I don't see how that's a disadvantage. It's a tough league for defensive backs. I guess I'm happy I'm a receiver in that way."

However, he knows he needs to show well at the weekend combine despite having little preparation time. Nielsen received his invitation less than two weeks ago.

On Saturday, 65 players (47 Canadian, 18 European) will be measured and weighed and perform the vertical jump and bench press. They'll conclude testing Sunday — with the 40-yard dash, three cone, shuttle and broad jump — before participating in one-on-one drills.

"I want to do my best (in testing)," Nielsen said. "But I'm really looking forward to the football drills.

"Obviously testing helps evaluation and the more data you have, the easier it is to assess and scout talent. But I also think at the end of the day it's about being a football player . . . it's the football part that's going to show the most."

European players remain unsure whether they're auditioning for a post-combine draft or free-agent contracts. And part of the CFL-CFL Players' Association collective bargaining talks includes deciding whether foreign players (not from the U.S.) will be deemed national or international.

"Nobody has really bothered to scout Europe in any way and so there's a lot of talent that has gone unnoticed," he said. "It's so beneficial for the European players because obviously you have the motivation to get better so you might be invited to the CFL combine.

"I also think the CFL can benefit also from European players . . . it's exciting for everyone involved."

However, Nielsen isn't allowing himself the luxury of thinking ahead to one day playing pro football in Canada.

"There's nothing more important than the next game," he said. "Of course, you're going to the combine because you'd like to play in the CFL but you're not going to play there unless you do this combine and do well at it.

"First things first and that's doing your best this weekend. Then we'll see where it takes me."