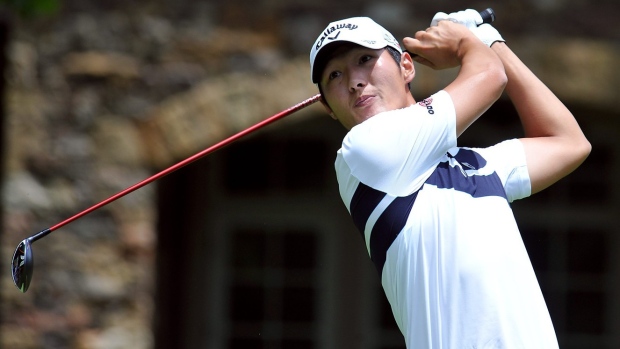 PLAYA DEL CARMEN, Mexico — Danny Lee felt as though he could make everything Friday, and for the longest time he did.

Already at 10-under par through 13 holes, Lee started thinking about a sub-60 round when he hit a downhill birdie putt too hard and wound up three-putting for bogey. Four pars later, he had to settle for a 9-under 62 and a one-shot lead among early starters in the Mayakoba Classic.

“Definitely, it was in my head, 59 or 58,” Lee said. “I never shot that score out on the PGA Tour before, so I really wanted to make that happen. On 14, I had a 3% downhill, less than 15-footer for birdie. Just one of those days I felt like I can make anything. I just gave a little too much extra and hit it through the break and missed the next one coming back.

Lee had a one-shot lead over Adam Long and Brendon Todd, who resurrected his career two weeks ago with a win in the Bermuda Championship.

Chris Baker reached 9 under through 15 holes until two bogeys over El Camaleon’s tough closing stretch. He wound up with a 64 and was in a group with Zach Johnson, Vaughn Taylor and Mark Hubbard.

The first round started a day late because of heavy rains — more than 9 inches since Monday — that left El Camaleon flooded and forced a washout Thursday. The second round was scheduled for Saturday, and because of limited daylight in November, the tournament will not end until Monday.

Lee shot 29 on the front nine, including a five-hole stretch he played in 6 under. The 62 matched his career-best round on the PGA Tour, a 62 he shot in the third round of the 2015 John Deere Classic.

Long and Todd already have won this year — Long at the Desert Classic in January when he beat Phil Mickelson, and Todd in a big surprise in Bermuda.

“I proved in Bermuda that I can kind of get into that mentality where I can go low again, and I basically started the day and said, ‘Let's try and birdie every hole.’ I know it's going to be soft and there's going to be birdies out there.”

He had four birdies on each side against no bogeys on the rain-softened course.

Defending champion Matt Kuchar had a pair of double bogeys in his round of 69 that left him seven shots behind. Jason Day, playing at Mayakoba for the first time in 10 years, shot 70.

Lee’s only PGA Tour victory was four years ago at the Greenbrier. He is coming off a strong Asian swing, with a runner-up finish to Justin Thomas at the CJ Cup in South Korea, and a tie for 10th in Japan, where Tiger Woods won his 82nd career PGA Tour title.

He was runner-up to Kuchar a year ago, and he tied for third at Mayakoba in 2015.

“Something about this course that just suits my eye very well,” Lee said. “I can read the breaks very well and I putted very well today.”

Past champion Graeme McDowell was among those at 66, along with Abraham Ancer of Mexico.

Nick Taylor of Abbotsford, B.C., was the low Canadian, five shots back.