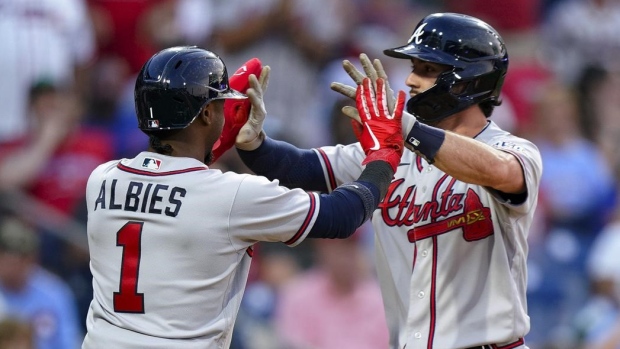 Charlie Morton (9-4) allowed two earned runs over six innings and struck out eight in his latest strong start. Morton has gone six or more innings in six of his last seven starts, with a 2.40 ERA during that stretch.

With the victory, the Braves — winners of the last three NL East titles — closed within four games of the idle New York Mets and tied Philadelphia for second place at 47-48.

“We’ve done a good job of preventing us from slipping into a hole by losing eight or nine in a row — that hasn’t happened,” Morton said. “We have to get into the reverse of that (go on a winning streak) and we’re capable of it. It doesn’t matter who were are playing because this division is so tight. I just think our team is really good and needs to go on one of those streaks.”

It came after the Braves arrived in Philadelphia early Thursday morning following a split-admission doubleheader at home against San Diego that began at 12:20 p.m. Wednesday and didn’t see the second game suspended due to rain until just after 10:30 p.m. Atlanta came out aggressive in the first game of an eight-game divisional road trip to Philadelphia and New York

“It was a long night last night and a short morning,” Braves manager Brian Snitker said. “But it was good to see them pushing the envelope a little bit early on.”

Meanwhile, the Phillies have lost three in a row after starting July on a 10-4 run to climb back above .500.

“Momentum is always the starting pitcher on the next day,” Phillies manager Joe Girardi said. “And we need a big start from (Zack) Wheeler tomorrow.”

Atlanta did most of its offensive damage against Phillies starter Matt Moore, who allowed six earned runs in six innings. Swanson, who was in an 0-for-14 slump and moved down to the fifth spot from the second spot in the order, landed the big blow in the third when he sent a fastball from Moore into the seats in left field for his 17th homer to make it 5-0.

“That may have been my first one of my 20-year baseball career,” Swanson said. “It was a cool moment. It was a great way to start the road trip: get some runs early and take control of the game early. Being up five runs after that was the biggest thing. That set the tone for the game.”

Added Moore: “That was as poor of a pitch as I made all night to Swanson. I think that while I did load the bases in that inning, there were a couple of pitches where I executed well. But I have to be able to wiggle us out of it somehow.”

The Braves shortstop has been better on the road than at home lately, connecting for five homers in his last 15 road games with a .316 batting average. During Atlanta’s last homestand, Swanson had only two hits in 22 at-bats in his last five games since the All-Star break.

“I was happy for Dansby,” Snitker said. “It was a huge hit to get on the board early. We had a lot of energy and emotion (after that).”

Arcia began the fourth with a solo homer, his second of the season, to make it 6-0.

Morton cruised for most of the night before stumbling a bit in the seventh when Didi Gregorius hit a leadoff triple and Odubel Herrera followed with an RBI double. Luke Jackson replaced Morton and got two outs before allowing Jean Segura’s RBI single that made it 6-2.

“I think the four-seamer was better than it has been,” Morton said. “Tonight, I did a pretty good job of elevating and staying behind it. I was throwing my curveball well and the changeup was there. We did a pretty good of mixing and getting back into the zone when I lost it. All in all, was a good effort.”

The Braves added a run in the ninth when Austin Riley drew a bases-loaded walk off Mauricio Llovera.

Braves: Announced that OF Ronald Acuna Jr. underwent successful surgery Wednesday on his torn right ACL that he suffered during a game in Miami on July 10. The surgery was performed in Los Angeles by Dr. Neil ElAttrache. Acuna is done for the rest of this season and could miss some time at the beginning next season.

Phillies: Herrera was activated off the 10-day injured list after being sidelined with left ankle tendonitis. To make room on the roster, the Phillies sent INF Nick Maton back to Triple-A Lehigh Valley. ... 3B Alec Bohm, who was placed on the COVID-19 list on July 10 after a reported positive test, went 1 for 3 as he began a rehab assignment in Lehigh Valley on Thursday. ... OF Bryce Harper was in the lineup after X-rays on his right foot were negative after fouling a pitch off it during Wednesday’s 6-5 loss to the Yankees.