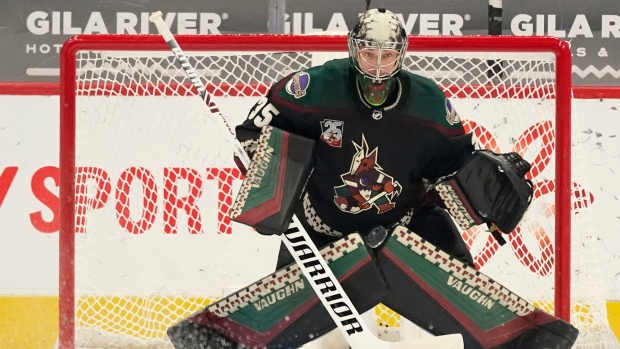 GLENDALE, Ariz. — The Arizona Coyotes spent the minutes before their first game after a long road trip fighting back tears.

The emotion of watching Leighton Accardo get inducted into the team's ring of honour seemed to take a toll on the ice during a sluggish first period.

Once they shook it off, the Coyotes leaned on some of the tenacity the 9-year-old showed in her fight against cancer to pull out a much-needed win.

Darcy Kuemper stopped 20 shots in his return to the lineup and the Coyotes fought through an emotional afternoon, rallying from a two-goal deficit to beat the St. Louis Blues 3-2 on Saturday.

The Coyotes formed a strong bond with Leighton over the past couple years, feeding off the inspiration of the bubbly girl with the tenacity of a hockey player.

Leighton died on Nov. 24 and the team took an extraordinary step on Saturday, making her the first person in NHL history who wasn't a player, coach, general manager or broadcaster to be inducted into a team's ring of honour.

The emotions still swirling, the Coyotes were caught flat-footed into their first home game in three weeks, falling into a 2-0 hole in the first period.

Arizona regrouped during the intermission and revved up the pressure in the second, tying it on power-play goals by Alex Goligoski and Clayton Keller. Michael Bunting scored early in the third, and Kuemper was sharp after the early goals in his first game since missing 19 with a lower-body injury.

The Coyotes ended a five-game losing streak and moved a point ahead of the Blues in the race for the West Division's final playoff spot.

“She inspired us in so many ways and we really didn’t need to talk about it because everybody knew who we were playing for tonight,” Kuemper said. “Sometimes the games, even as important is this one is, it’s a little bit bigger than hockey. We just wanted to go out and make her proud.”

St. Louis was plagued by another shaky second period to lose its hold on fourth place in the West.

Sammy Blais and Tyler Bozak scored in the first period, but the Blues spent most of the second on their heels.

Jordan Binnington stopped 26 shots for St. Louis, which has been outscored by 18 in the second period this season.

“It's tough to explain. I don't think we really know what's going on, but it's definitely an issue,” Blues centre Ryan O'Reilly said. "We have a great start, they made a push and we don't turn up the aggression and gain the momentum back.

The Coyotes and Blues played what had the feeling of an in-season playoff series in February.

Due to COVID-19 postponements, Arizona and St. Louis played an NHL-first seven straight regular-season games that grew with intensity each time they met. The Coyotes won the series with a 1-0 win in “Game 7.”

The Blues had the early jump in the season series finale, scoring 1:23 in when Blais beat Kuemper to the stick side from the top of the circles.

Bozak made it 2-0 midway through the first, lifting a rebound of his own shot over Kuemper's left shoulder on a power play.

The Coyotes needed less than two minutes of the second period to get back in it, pulling within 2-1 when Goligoski one-timed a pass from behind the net by Nick Schmaltz.

Keller tied it on a power play midway through the second, beating Binnington to the glove side with a wrist shot from the right circle.

Binnington made some tough saves to close out the second period, but Bunting beat him in early in third on a redirect of a shot by Jakob Chychrun.

“We were prepared. We started the first period off well, a 2-0 lead, and we go out in the second period and we’re not aggressive anymore,” Blues coach Craig Berube said. “We sit back and let teams come at us, get on our heels and next thing you know, they score right away. Fragile.”

Bunting has played well when he's been with the Tucson Roadrunners, leading the Coyotes' AHL affiliate in all-time goals, points and games.

The left wing had a chance to prove himself in the NHL in 2018-19, but lasted just five games.

The 25-year-old has been stellar since being called up this season, scoring seven goals in 10 games.

St. Louis hosts the first of consecutive games against Colorado on Tuesday.

Arizona hosts the first of two straight games against Minnesota on Monday.