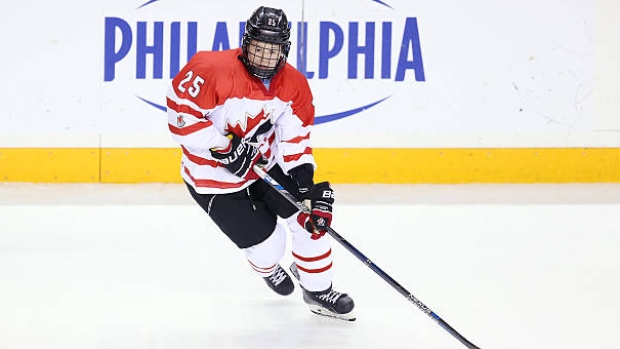 The euphoria has not subsided in the five days since Toronto native Daryl Watts channeled her inner “Kobe!” by banking in the overtime winner that delivered a sixth national championship to her Wisconsin Badgers.

“We’ve been enjoying it, spending time together and doing college things,” Watts said from Madison. “It’s been awesome. Easily the best week of my life.”

Watts is a finalist for the 2021 Patty Kazmaier Memorial Award, presented to the most outstanding women’s college hockey player, which will be unveiled on Saturday night live on NHL Network.

With fellow Badger and Montreal Canadiens blue-chipper Cole Caufield the front-runner for the Hobey Baker Award, Wisconsin could become the first school ever to have the top players on both the men’s and women’s side on campus at the same time.

Watts is gunning for her second Kazmaier, which would make her just the second player to win the award twice, joining Winnipeg native and former Harvard star Jennifer Botterill. Watts captured the Kazmaier in 2018 after bursting onto the NCAA scene at Boston College.

Over her four years in school – she transferred to Wisconsin after her junior season – Watts led the nation in points per game three times.

Now the pride of Toronto’s Kingsway neighbourhood and Bishop Strachan School has her sights set on Team Canada.

Watts, 21, will return home next week to quarantine for two weeks before heading to Halifax on April 14 for Team Canada’s national women’s team selection camp. She is one of 10 college hopefuls among 47 total camp participants vying for 23 roster spots.

Anyone making this spring’s world championship roster will have a leg up for the squad that goes to China eight months later for the 2022 Winter Olympics in Beijing.

And Watts is right in the mix. 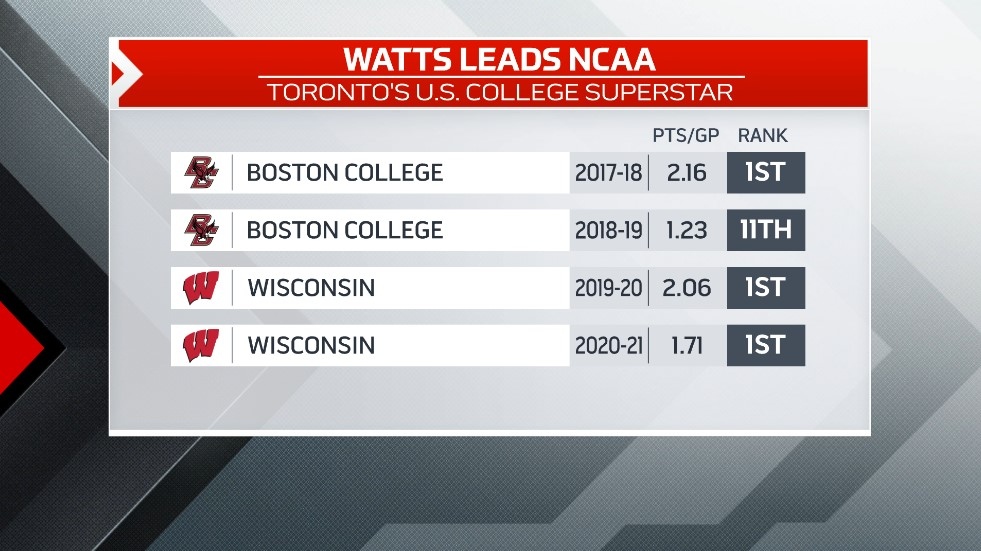 “We’ve had our eye on Daryl for a while, she has been in our program for years,” said Gina Kingsbury, the director of Canada’s women’s national team. “This wasn’t just one great weekend for Daryl. She’s had a very substantial college career.

“I’m cautiously optimistic because it is a different pace at a higher level, but we’re excited to see where she stacks up best-on-best with some of the best players in the world.”

On the one hand, Watts may have a leg up on some of her competition coming off a 21-game collegiate season. Competitive play has been sporadic for veterans between the PWHPA’s successful Dream Gap Tour stops and the NWHL’s Isobel Cup playoffs.

But with a two-week federally mandated quarantine and then another week quarantine on tap once she arrives in Halifax, that will be three weeks off the ice.

“It is unfortunate, because hockey is one of those sports that you lose a lot of momentum when you’re not on the ice,” Watts said. “But everyone is dealing with that. I was talking with my coach, Mark Johnson, and I’m just staying focused. I’m looking forward to playing free, playing with confidence.

“I’m more mature now, more confident now. I’m excited to see some of my really great friends [on Team Canada] and just do my best. I know what I can do when I play to my abilities.”

Kingsbury acknowledged Team Canada is a “tough roster to crack.” The average age of the 35 players who took part in Team Canada’s March training camp in Halifax was 27.5 years old. They are professional players who train on another level.

But there is a potential opening if Watts – or another player – can open the eyes of the Canadian brass.

“I could say that we have no spots open, but I think you always have movement,” Kingsbury said. “It all depends on what we see. We are open and willing to make changes.

“We haven’t won in several years and I’m not denying that. We need to start winning and it’s about making sure the pieces fit together, not necessarily about having the most talented team.”

Kingsbury and her staff have been online scouting, devouring video to try and see as much as they can. But she won’t know until everyone gets on the ice in mid-April.

If Watts doesn’t fit into the mix this year, Kingsbury is hoping she can stick with it to potentially be part of the next four-year Olympic cycle.

Watts says she plans to return to Wisconsin for her fifth season of NCAA eligibility, afforded to all athletes as a result of the pandemic, where the Canadian reigns as queen of the college hockey world.

“It’s very exciting for sure to try and live out every little girl’s hockey dream and play for your country,” Watts said. “But my time at Wisconsin has been awesome.”