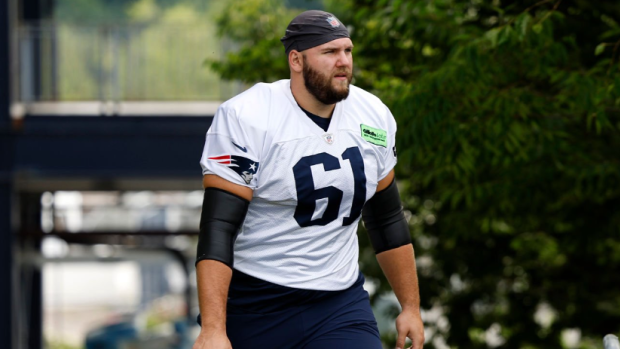 FOXBOROUGH, MASS. -- Under a blazing hot sun, Drew Desjarlais was putting in extra one-on-one time on stand-up linebacker pass rushes after most of his teammates had trickled off the New England Patriots practice field to the respite of a cool locker room.

It’s the first NFL training camp for the University of Windsor product who became a mainstay on the Winnipeg Blue Bombers offensive line midway through his rookie season in 2019, then evolved into a dominant presence at guard as his team rolled to a second consecutive Grey Cup last December.

His play during those two championship runs earned the Belle River, Ont., native the opportunity to make the jump to the NFL with New England this summer.

“It’s been great to be part of something like this,” Desjarlais said after his post-practice drill wrapped up on Monday. “From day one you know it’s going to be a great experience. You’ve got the coaching, the competition, such an amazing organization. How could I go wrong really?”

Desjarlais was the highest CFL draft pick ever from the University of Windsor when Winnipeg selected him fourth overall in 2019, joining a team that already had one of the league’s best offensive lines when he arrived.

“…I was extremely lucky to join a solid group of veteran o-linemen [in Winnipeg],” Desjarlais said. “It helped me like crazy and being able to fit into that system …They taught me what it’s like to play professional football. To follow the leader on the attitude, the effort, the preparation – all that stuff.”

Desjarlais has been holding his own at guard during practice according to local media observers, working with the second and third units and competing for a backup role.

Still just 25 years of age, he’s also a candidate for the Patriots practice roster, where his development could continue into the season. Desjarlais has the extra challenge of adapting his CFL technique to American football, where defenders are not required to line up a minimum of one yard off the line of scrimmage.

It’s a transition he was able to ease by focusing on adapting his skills during off-season OTA practices, making it second nature by the time he got to camp.

“It’s not an entirely different game but there are certainly adjustments to be made,” he said. “The quickness, the splits between the centre and the guard, it’s all kind of different things. Nothing I’m totally unfamiliar with, so it was great to get in here and start getting adjusted as soon as possible.

“I’m just taking in all the coaching I can and just trying to move forward every day.”

Desjarlais has also been keeping up with his former team in Winnipeg, watching every game of their 9-0 start.

“It doesn’t look like they miss me,” he said with a laugh.

Desjarlais is expected to see his first preseason action when the Patriots host the New York Giants on Thursday.