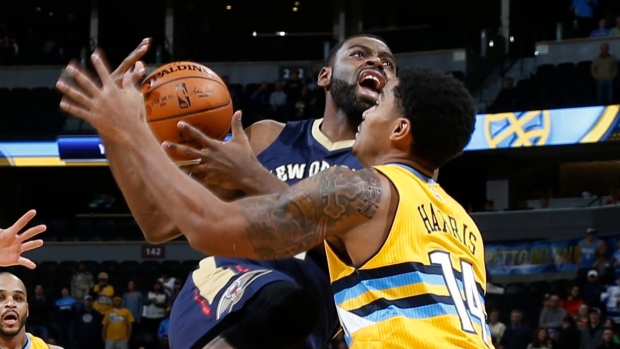 DENVER - Anthony Davis had quite an impressive stat line: 27 points, six rebounds, four blocked shots and, maybe the most important one of all, four IVs.

Those were vital to getting the under-the-weather forward back on the floor.

Davis left after the first quarter with an illness only to return in the fourth and lead the New Orleans Pelicans to a 130-125 win over the Denver Nuggets on Sunday night.

"I was pretty sick," Davis said.

So sick, that he didn't think he'd even play at all. He received two IVs before the game and two more after the first quarter. He was trying to rush back onto the floor, but, as he found out, IVs "don't go at a rapid speed," explained Davis, who scored 19 points in the first quarter.

"We were lucky to get him back," Pelicans coach Alvin Gentry said.

New Orleans was trailing 106-104 when Davis returned to the court with 8:20 remaining. The Pelicans went on a 19-10 run to take control of the game. Davis had two of his blocks in the final 40 seconds to help the Pelicans finish a five-game road swing with a 2-3 mark. They're now 3-13 on the road this season.

"He played great tonight. He had a great start and great finish," guard Eric Gordon said. "We didn't expect him to come (back), but he came in and made some very big plays at the end."

Left the Nuggets feeling a little ill, too.

"Embarrassing. That's what I would say. I would say it that way," Nuggets coach Michael Malone said. "You give up 130 points. You give four, 30-plus point quarters. There is no excuse."

The Pelicans had six players finish in double figures, including 21 points apiece from Tyreke Evans and Jrue Holiday.

Reserve Will Barton had a career-high 32 points for the Nuggets. He also had 10 rebounds.

Denver was up 80-77 in the third quarter when hot-shooting Danilo Gallinari turned his left ankle after stepping on the foot of Ryan Anderson. The Pelicans took advantage by going on a 14-2 run in what was a back-and-forth game.

Gallinari said after the game his ankle was all right.

"Nothing to be concerned about," said Gallinari, who had 18 points.

Two nights ago in a loss at Phoenix, Gentry was agitated with his team's lacklustre play, saying, "terrible, terrible, bad effort, not playing hard, not giving a damn."

Now this was much better. Their offence was more efficient, shooting 56.4 per cent. The Pelicans also bottled up the Nuggets down the stretch, too.

"I thought we did everything we needed to," Gentry said.

Nuggets: Darrell Arthur left in the first quarter with right knee soreness. ... Kenneth Faried finished with 21 points and 13 rebounds. ... Rookie Emmanuel Mudiay (sprained right ankle) missed a fourth straight game. ... The Nuggets scored a season-high 74 points in the first half — a total they had for an entire game on Dec. 8 against Orlando.

Davis had a monster first quarter in which he scored 19 of his team's 36 points. It was the highest scoring quarter of his NBA career, according to STATS. Davis' previous best was 17 on two occasions, most recently in the fourth quarter November 6 against Atlanta.

"I was just trying to score," Davis explained. "I've been struggling the past couple of games. ... Wanted to come out and play hard. Just try to be aggressive."

Although several Nuggets posted big numbers, Malone wasn't putting much stock in it.