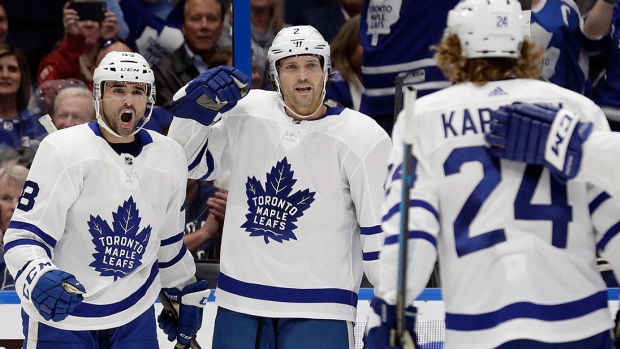 With Jake Muzzin now in the fold, the Toronto Maple Leafs' No. 1 trade deadline priority is something that has been on head coach Mike Babcock's wish list for a while - getting a heavy forward.

As a Stanley Cup winner with the Detroit Red Wings, Babcock knows that heavy hockey wins in the playoffs and you don't have to look very far to see the impact it had on the Washington Capitals' run last spring with Tom Wilson, Brett Connolly and Devante Smith-Pelly in the lineup.

What are the 'heavy' possibilities for the Leafs?

TSN Director of Scouting Craig Button suggests Micheal Ferland and Wayne Simmonds, two power forwards who are near the top of TSN Hockey's Trade Bait list. A player like Simmonds can play with good players and be a commanding presence in front of the net on the power play.

Also, look back a couple of years and see the impact that Patric Hornqvist had with the Pittsburgh Penguins - Simmonds can replicate that role on a contending team. Malkin and Crosby also play heavy games for Pittsburgh in the playoffs and Auston Matthews and John Tavares will follow that lead. Where Babcock will want to add another heavy forward is on the flanks.

A lower priority for the Maple Leafs is a right-shot blueliner. General manager Kyle Dubas hinted earlier this week with reporters that he wants to continue to bolster the defence. The box that Muzzin does not check is playing on the right side.

Babcock loves that balance in his pairings, but in a cap situation now where it's dollars in and dollars out, the Maple Leafs are probably nibbling around the edges, trying to get a seventh guy as insurance.

For the Leafs, it's not just about trying to win a playoff round for the first time since 2004, but also trying to take down the league-leading Tampa Bay Lightning in the toughest run to the Stanley Cup.