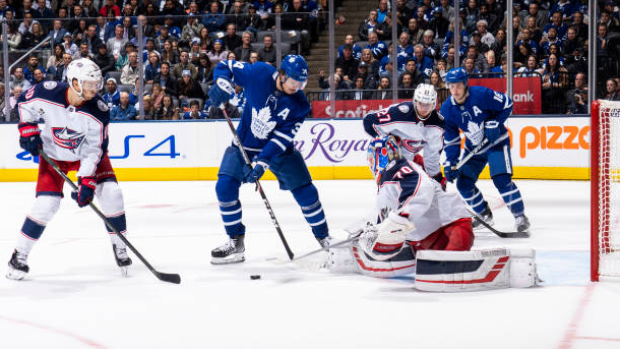 If the National​ Hockey Le​ague season resumes with a 24-team format, the Toronto Maple Leafs will take on the Columbus Blue Jackets in the play-in round. It would be a battle between the No. 8 and No. 9 teams in the Eastern Conference based on points percentage and it projects to be a tight affair.

Leafs beat reporters Mark Masters and Kristen Shilton look ahead to what would be the first postseason showdown between the teams by presenting three reasons why Toronto will win and the three reasons why Columbus will win.

Mark: Alright, Kristen, let's start with why ​the Leafs will win. What's the top reason?

Kristen: Well, the Leafs didn't go into the pause on a hot streak scoring just five goals in their last four games, but throughout the season Toronto was a dominant team offensively. They averaged 3.39 goals per game over 70 games, which is third-most in the NHL, while Columbus averaged the fifth-fewest goals per game in the league at 2.57. Columbus doesn't have a single player over the 50-point mark while the Leafs have four that have 59 points or better. So, when you think about the arsenal of weapons the Leafs can draw on up front, it’s going to be tough for the Blue Jackets to match.

Mark: Early season games tend to be looser when it comes to structure and systems, so that should help the Leafs as well. And Auston Matthews has been a fast starter throughout his NHL career, so he has the potential to take over this series.

Mark: The Leafs don't just have the edge on offence, they also have an edge in net. Frederik Andersen has 48 playoff games on his resume and reached a conference final with the Anaheim Ducks. The big concern with Andersen in recent years has been fatigue, but he will be fresh for this series. Andersen wasn't having a great year, but was rounding into form before the pause. As for Columbus, Elvis Merzlikins and Joonas Korpisalo played well in the regular season, but neither has played in the playoffs before. Plus, it's unclear who would even get the start in Game 1 and whoever gets the nod knows they'll be on a short leash, which isn't ideal.

Kristen: There really is no substitute for experience when it comes to playoff goaltending. And there is also no substitute for solid special teams. The Leafs should have an advantage there, too. Columbus' power play is near the bottom of the NHL clicking at just 16.4 per cent and the Blue Jackets scored only two power-play goals in their final seven games before the pause. Now, the Leafs don't have a great penalty kill, sitting 21st in the NHL at 77.7 per cent, but they do have the sixth-ranked power play in the league at 23.1 per cent. Getting a healthy Jake Muzzin and Ilya Mikheyev back for the postseason should help Toronto's penalty kill pick up where they left off before the pause, with only one goal allowed in seven games.

Mark: In the last two playoffs, Boston scored 14 power-play goals in 14 games. Simply put, the Leafs’ penalty kill killed their chances and that shouldn't be an issue against the Jackets. Okay, so that's the case for the Leafs, but what about the Blue Jackets?

1. Defence wins in the playoffs

Mark: The No. 1 edge the Jackets have is they are a better defensive team. Columbus allowed just 2.61 goals per game this season, which was third fewest in the NHL. The Leafs, meanwhile, allowed 3.17 goals per game ranking 26th. While Columbus can ride the Zach Werenski and Seth Jones pairing for close to half the game, Toronto's defence remains a question mark. Cody Ceci and Travis Dermott struggled for much of the season and Tyson Barrie is dealing with the pressure of being a pending unrestricted free agent.

Kristen: Justin Holl plays a top-four role, but doesn't have a ton of experience at the NHL level. And Toronto isn't exactly deep on the blueline with rookies Rasmus Sandin and Timothy Liljegren in reserve.

Kristen: The Blue Jackets hold an edge in experience behind the bench where John Tortorella will aim to outmaneuver NHL newbie Sheldon Keefe. Tortorella has 1,327 games under his belt and is 14th all-time in wins with 655. And he's won a Stanley Cup. Keefe has coached 47 NHL games, and this will be his first crack at the NHL playoffs. He may have helped lead the Toronto Marlies to a Calder Cup title a couple years ago, but Tortorella has surely picked up a thing or two over the 110 postseason games he's been a part of, and that could ultimately benefit the Blue Jackets in a big way.

Mark: Keefe played for Tortorella early in his NHL career in Tampa and calls him one of his coaching influences, so that certainly adds an interesting subplot to this series.

Mark: That brings us to our third and final point on why the Leafs will lose: Columbus is healthy and battle-tested. You might say, health is equal across the board. Kristen, you already mentioned the Leafs will get Muzzin and Mikheyev back, but no one is getting a bigger boost than the Jackets. After leading the NHL in man-games lost this season, Columbus will likely get Jones, Cam Atkinson, Oliver Bjorkstrand, Alex Texier, Nathan Gerbe and Dean Kukan back. Ryan Murray was also banged up at the time of the pause and will have benefitted from the break. And it's even possible that Josh Anderson could play. The physical forward underwent shoulder surgery on March 2 with a four-to-six-month timeline for a return. The pending restricted free agent will be careful, but if he does play then his presence could be an X-factor.

Ultimately, the Jackets have the experience of winning in the playoffs against an offensive-minded team just last year while the Leafs carry the burden of past playoff failures. Toronto is the favourite and that can be an uncomfortable role, especially in a shorter best-of-five series.

Kristen: And it’s technically a play-in series so there's the added pressure of possibly missing the actual playoffs. It'll be something new to navigate.

Mark: The Leafs haven't won a series since 2004, which was also the last time they entered a series as the higher seed.