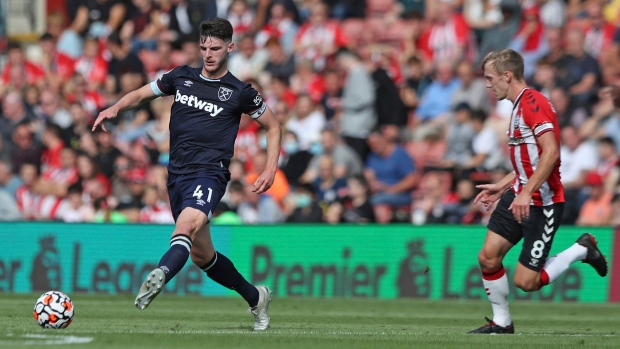 SOUTHAMPTON, England (AP) — Declan Rice cleared a header off the goalline in stoppage time to salvage a point for West Ham in a 0-0 draw at Southampton in the English Premier League on Saturday.

Armando Broja headed in a corner low to beat goalkeeper Lukasz Fabianski but Rice was at the far post and cleared it off the bounce to keep West Ham unbeaten after four games.

West Ham entered as the league co-leader with 10 goals but it never seriously threatened at St. Mary’s and turns its attention to a Europa League match at Dinamo Zagreb on Thursday.

Broja, on loan from Chelsea, came on as a substitute in the 74th and hit the post with a shot seven minutes later in an impressive performance by the 20-year-old Albania international.

It was the third consecutive draw for Southampton.

West Ham had a good chance in the 68th when midfielder Jarrod Bowen fired from close range, producing a save over the bar by goalkeeper Alex McCarthy.

The Hammers will be without top-scorer Michail Antonio when they host Cristiano Ronaldo and Manchester United next weekend. The Jamaica international, who has four goals, was sent off moments before the final whistle after receiving his second yellow card for a dangerous challenge.