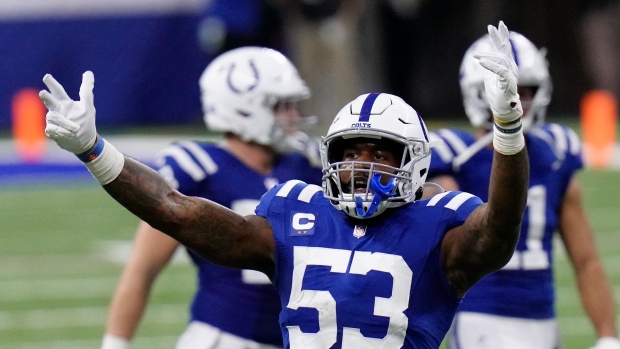 INDIANAPOLIS — The Indianapolis defence may have turned Aaron Rodgers into a true believer Sunday.

Others around the league should take note, too.

After allowing three touchdown passes and 28 first-half points, the Colts held one of the NFL's highest-scoring teams to three second-half points, forced a key fumble less than a minute into overtime and set up Rodrigo Blankship's decisive 39-yard field goal for a 34-31 over the Green Bay Packers.

“We actually talked in the first quarter and he made it a point to say he didn't mean it as any disrespect to me," Pro Bowl linebacker Darius Leonard said, referring to a comment Rodgers made during the week. “I told him I didn't really take it as a disrespect, I took it as a challenge to go out and earn your respect. I told him I look for whatever motivates me because that’s my ultimate goal: To win the game and earn the respect of your opponent."

Leonard and his teammates certainly lived up to their No. 1 defensive ranking over the final 33 minutes. They forced three fumbles and an interception. They held Aaron Jones to 41 yards rushing on 10 carries. And they limited Green Bay (7-3) to 18 offensive snaps over the final two-plus quarters.

Indy (7-3) did it with an old-school combination: An offence that played keep-away while the defence came up with two three-and-outs in the third quarter and a fourth down stop late in the fourth.

Yet in this wild, wacky game, it almost still wasn't enough.

Five holding penalties allowed Rodgers to get one more shot in regulation, starting at the 6-yard line with 85 seconds left. Then on third-and-10 he hooked up with Marquez Valdes-Scantling for 47 yards. Six plays later, Mason Crosby hit a 26-yard field goal to tie the score with 3 seconds left.

So when the Packers won the coin toss and took the ball, it seemed they had all the momentum as Leonard started talking to himself.

“When the game's get close you've got to want to make a play," he said. “You have to be the one to go out there with no fear and no doubt in your mind that you’re going to make a play. I was basically saying this is my time to go. If you get an opportunity you’ve got to make a play."

“Looked like a good play by the nickel, he kind of split Allen (Lazard) and Bobby (Tonyan) there," Rodgers said. “But I think the ball was just a little loose. That stuff happens. He made a big play at the end of regulation to kind of get us going on third-and-10. Disappointed for him, disappointed for us."

Rodgers was 27 of 38 with 311 yards, three TD passes and one interception. Davante Adams had seven catches for 106 yards and one score while Jones rushed for another score.

Philip Rivers led the Colts back from a 14-point halftime deficit by going 24 of 35 with 288 yards, three touchdowns and one interception, Former Wisconsin star Jonathan Taylor had 22 carries for 90 yards.

Rivers made his 234th consecutive start, tying Eli Manning for 10th on the league's all-time list. Breaking the tie may require some help after he injured the big toe on his right foot in the fourth quarter.

“I’ve never had anything with a toe before," he said. “It will probably be a sore week, but I should be all right."

Rivers also finished with a passer rating of 107.2, the 108th game he's topped the 100 mark. He tied Hall of Famer Brett Favre for the fourth-most 100-rating games in league history.

Packers: Green Bay had two key players back, receiver Allen Lazard and cornerback Kevin King, but lost centre Corey Linsley (back) in the first quarter. He did not return.

“We knew what we were facing," Packers coach Matt LaFleur said. “We knew we were facing a really good football team that does as good a job as anybody that we’ve seen in terms of punching the ball out. And when you lose the turnover battle like that, it’s usually going to end up in a defeat.

Packers: They hope to rebound next Sunday night when they host the longtime rival Bears.

Colts: They attempt to take sole possession of the AFC South lead when Tennessee visits Lucas Oil Stadium next Sunday.