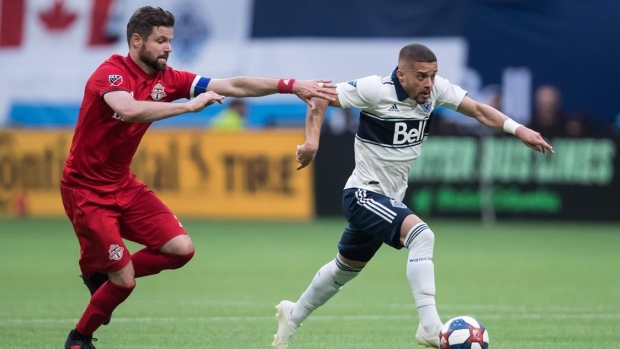 Toronto FC's game in Colorado on Saturday will be part reunion, albeit with three points on the line.

The Rapids are full of TFC connections starting with head coach Robin Fraser, a former TFC assistant who took over the Colorado team in August 2019.

"I haven't seen them in a game that counts since I left," said Moor, who rejoined Colorado as a free agent in November 2019. "I definitely miss seeing some of the guys and really the team as a whole.

"When the schedule came out, I knew it was going to be super-imbalanced. But to have them on it was pretty special. I'm looking forward to it."

Toronto goalkeeper Alex Bono, for one, keeps an eye on the Rapids.

"It's one of those teams, when you see them do well it kind of puts a smile to your face because you got to spend so much time with some of the players and the staff members of that team," he said. "It will be good to see Robin and some of those guys. It will be fun to compete against them. They're one of the top teams in the West right now."

Their last loss was July 24 at Real Salt Lake.

Toronto and Colorado have not met since a pair of meetings during the 2020 pre-season.

Like many, Moor is surprised by TFC's rough go of it this season. But he says the problems posed by the pandemic have made life difficult for Canadian teams.

"I know they've said all the right things, that it's not an excuse and stuff. But I would use it as a pretty good excuse because they were away from their families, away from their homes. They were living in a hotel, they were playing home games in an away stadium."

Add a coaching change and it's been "a very difficult situation."

"Maybe that's just my rose-coloured glasses because I still love TFC and I always will," he said. "And I still have a lot of very close friends there. But I think it's a fair thing to bring up when you talk about where they are in the table."

Having said that, Moor says the results don't jive with the quality of the roster.

"But they've been just dealt a very difficult hand. Same with Vancouver and Montreal."

The 37-year-old Moor has seen limited action this season with 168 minutes spread over eight games. That brings his career MLS regular-season total to 398 appearances.

"I feel good," he said. "Certainly no longer an every-day 90-minute guy, which is fine. I don't think too many 37-year-olds are … but I still love going to training every single day. I have a smile on my face and I put the work in and do everything I can personally to continue to improve myself and help the team out."

"I definitely don't feel like I did when I was 22 or 23 but I do feel like I can still play a big part for this Rapids team and I'm enjoying doing it right now," he added.

He hopes to continue playing after this season but has already starting taking his coaching licences. He put on a coaching hat briefly last last season with other senior players when Fraser and other members of the coaching staff were sidelined during a COVID outbreak.

Broadcasting and scouting also interest him as post-playing options.

A former captain of the Rapids, he met his wife Shelby in Colorado. The couple now have two sons, both born in Canada.

"Colorado is good, man, we're happy to be back here," said Moor.

Moor is also savouring life under Fraser, whom he has known for a long time.

"(Fraser) knows his team well, he knows his players well. He knows how to get the most out of them. And he and I are just kind of wired together," said Moor.

Fraser's last year as a player, in 2005 with Columbus, was Moor's first in the league, with FC Dallas. Greg Vanney, who had played with Fraser at the Los Angeles Galaxy, was also with Dallas at the time so Moor got to know Fraser through Vanney.

The three were reunited at Toronto with Vanney, who is now in charge of the Galaxy, as head coach.

Moor joined Toronto in December 2015, becoming the club's first free agent MLS signing. He was one of four key signings that off-season, along with Irwin, Beitashour and Canadian midfielder Will Johnson.

But it was Moor whom then-GM Tim Bezbatchenko called `"a key piece in the puzzle.''

With Moor marshalling the backline, Toronto's goals-against total dropped from a league-worst 58 in 2015 to 39 in 2016. TFC made it to the MLS Cup final, only to lose to the Seattle Sounders via penalty shootout. Toronto and Seattle met again in the 2017 championship game, with Toronto winning 2-0.

In a tribute video after his departure, TFC called Moor "a champion and legend on and off the pitch.'' In the video, Moor called coming to Toronto a "life-changer'' and said TFC helped rejuvenate and refocus him.

Moor said Colorado was his first choice after Toronto. He said Fraser's appointment made it an even more attractive destination but admitted that Fraser "challenged" him before signing.

"He wanted to make sure that I wasn't just coming back to Colorado because it was a familiar for me and a place I had a lot of history, before" he said.

Moor began his career with Dallas, who took him sixth overall in the 2005 MLS SuperDraft. He made 128 appearances in the regular season and playoffs for Dallas before being traded to Colorado in August 2009.

This report by The Canadian Press was first published Sept, 24, 2021.