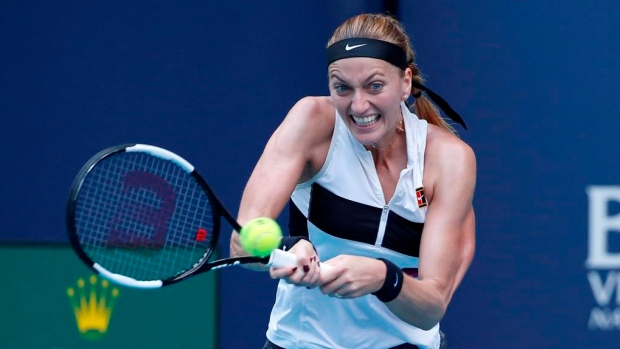 MADRID — Defending champion Petra Kvitova defeated Kristina Mladenovic 6-3, 7-6 (5) to reach the third round of the Madrid Open on Monday.

The second-seeded Czech outlasted Mladenovic by winning the last three points in the tiebreaker to close out the match in nearly two hours.

Kvitova, seeking her fourth Madrid Open title, was in control until losing her serve midway through the second set, letting the French qualifier back into the match.

Kvitova had seven aces at the "Magic Box" centre court en route to her eighth straight win in Madrid. She is the most successful women's player in the tournament with 28 wins and six losses. Her other titles in the Spanish capital came in 2011 and 2015.

Mladenovic was the runner-up in Madrid in 2017.

Kvitova will next face wild card Sorana Cirstea or former No. 4 Caroline Garcia.

In other second round matches, seventh-seeded Kiki Bertens defeated Jelena Ostapenko 6-4, 6-3 to stay on track to make it to her second straight final in Madrid, while eighth-seeded Sloane Stephens got past Victoria Azarenka 6-4, 2-6, 6-2.