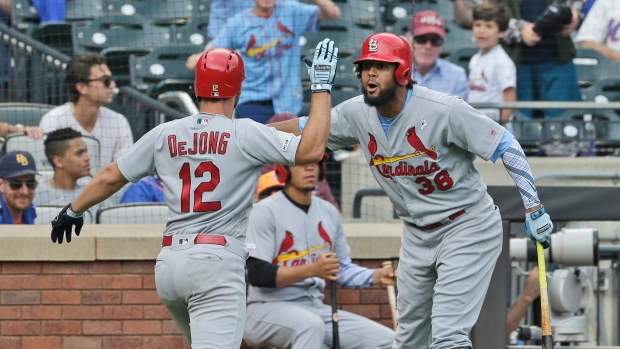 The young shortstop is 30 for 83 (.361) with nine homers and 10 doubles over 20 career games against the Mets. He has connected for five homers in his last five games at Citi Field.

The Cardinals won despite getting outhit 10-3. They took three of four in the series, and DeJong homered in each victory.

"Nothing comes to mind," DeJong said of his mastery of the Mets.

DeJong connected off Chris Flexen (0-3) for his solo drive.

"He hung a 3-1 slider. I was looking fastball and I just reacted," DeJong said. "I thought they were pitching around me early in the count and they challenged me late and I was ready."

The loss was the latest in which Mets relievers couldn't shut down an opponent.

The Cardinals rallied against New York's bullpen in each of their wins in series.

"You talked about resilience, we talked about different ways we beat people," Cardinals manager Mike Shildt said. "The entire series was indicative of that."

Paul Goldschmidt hit a prodigious home run off the facade of the second deck and scored twice for St. Louis, which went 5-5 on its season-long 10-game road trip.

Robinson Cano returned from the injured list and doubled and scored a run, and Dominic Smith had two hits in his first career start in the leadoff spot for New York, which is 5-5 over its last 10 games.

Mets starter Jason Vargas exited in the fourth inning with a cramp in his left calf. He fouled a ball off his foot and was pulled during the at-bat. He allowed three runs over four innings, matching the number of runs he'd allowed over his previous 22 innings.

Vargas anticipated being able to make his next start.

Andrew Miller (3-2) pitched a scoreless seventh to earn the victory and Carlos Martinez went two innings for his second save.

Pinch-hitter Todd Frazier reached far over the plate and, with one hand, blooped an opposite-field single to right with one out in the Mets ninth. Frazier shared a quick laugh at first base with Martinez, who then got pinch-hitter Wilson Ramos to ground into a game-ending double play.

Goldschmidt's first-inning homer was the only hit the Cardinals could muster in the first seven innings against Vargas and Wilmer Font. Yadier Molina's ninth-inning single was the only other Cardinal to reach with a hit.

Dakota Hudson struggled early, falling behind eight of the first 12 batters, but rebounded to keep St. Louis in the game, allowing three runs over six innings. The Cardinals have won each of his last six starts.

J.D. Davis and Adeiny Hechavarria each had an RBI for New York.

Mets: RHP Noah Syndergaard was placed on the 10-day injured list with a strained right hamstring. He underwent an MRI Sunday and Callaway said results would be announced Monday . OF Brandon Nimmo (neck) has visits scheduled with additional specialists as he continues to deal with a bulging disk.

Mets: RHP Zack Wheeler (5-4, 4.87 ERA) looks to bounce back as New York opens a three-game series at NL East-leading Atlanta. Wheeler allowed a career-worst nine runs in 4 2/3 innings against the Yankees on June 11, although only five were earned. He's opposed by RHP Mike Soroka (7-1, 1.92 ERA), who has not lost since April 18.