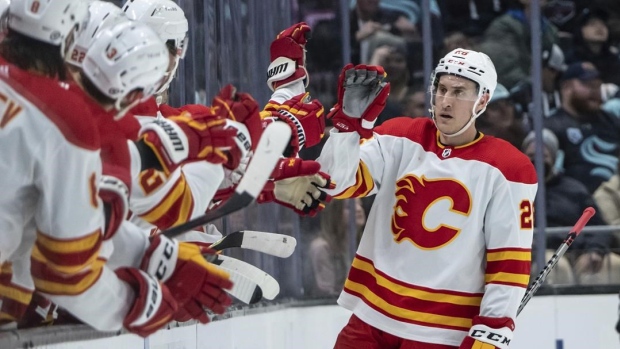 Veteran defenceman Michael Stone has been activated from the injured reserve after missing 10 games with an undisclosed injury. The 32-year-old has two goals and three assists over 10 games this season.

#Flames Roster Update: Michael Stone has been activated from the Injured Reserve.

Head coach Sheldon Keefe confirmed that forward Denis Malgin will replace veteran forward Wayne Simmonds for Saturday's road game against the Pittsburgh Penguins. The 25-year-old Malgin has two goals and two assists over 16 games with the Maple Leafs this season.

Elsewhere, Keefe says injured goalie Ilya Samsonov is getting closer to a return, but doesn't have a timeline and won't be available for the current road trip.

Sheldon Keefe says Ilya Samsonov is inching closer to a return and doing more with each skate. Doesn’t have a timeline on his return because he hasn’t looked into it since he’s known he wasn’t available for this road trip. @BodogCA @RinkWideTOR

Avs forward Evan Rodrigues will miss the next 2-4 weeks with an injury, head coach Jared Bednar confirmed on Saturday.

Evan Rodrigues is out 2-4 weeks, per Jared Bednar.