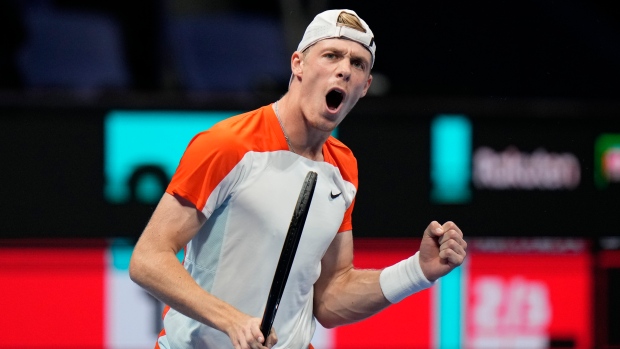 TOKYO — Canada's Denis Shapovalov advanced to the quarterfinals of the Japan Open with a 6-3, 6-1 victory over Japanese qualifier Rio Noguchi on Thursday.

Shapovalov, who is coming off a final appearance at the Korean Open on Sunday, had his serve working in a dominating display at Ariake Coliseum.

The 23-year-old Richmond Hill, Ont., native did not face a break point and won 81 per cent of his first serve points in a match that lasted just 57 minutes.

"I'm definitely happy to be in the quarters here," Shapovalov said. "I always feel like I bring out some good tennis late in the year, and I'm very happy that's the case again. Hopefully I can keep rolling with it."

Shapovalov, the No. 7 seed, will face the ninth-seeded Borna Coric of Croatia in the quarterfinal

Coric delivered 10 aces in his 7-5. 6-2 victory over American Brandon Nakashima on Thursday.

"He's a tricky player for sure," Shapovalov said of Coric. "I've struggled with him in the past. He's been playing some great tennis this season. It's going to be a tough match."

The Serbian was trailing 40-0 with Evans serving at 5-4 in the third set before producing series of winners to level the match.

“That was the first time that I was able to do that,” Kecmanovic said. “I was completely tuned out of the match, and I just went for it in that moment.”

Kecmanovic will next take on Frances Tiafoe in the quarterfinals. The American won his 13th consecutive tiebreaker to beat Bernabe Zapata Miralles 6-1, 7-6 (7).

Nick Kyrgios had 22 aces in his 3-6, 6-2, 6-2 victory over Kamil Majchrzak. The Australian qualified for his ninth quarterfinal appearance this year.