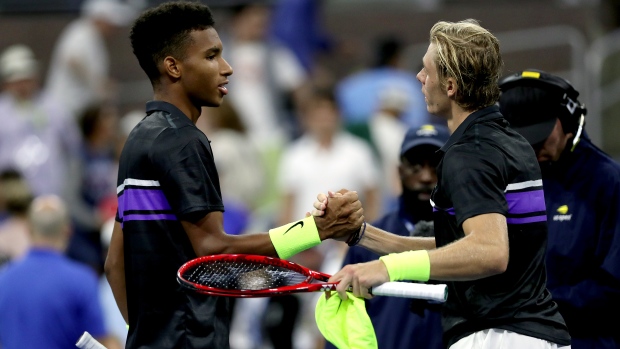 The outcome was anything but that.

"Both mentally and tennis-wise, I think I was pretty flawless today. I stayed focused, and I think I executed pretty well," Shapovalov said.

The 20-year-old from Richmond Hill, Ont. hit 28 winners to only nine for Auger-Aliassime. He broke his serve six times in 10 opportunities — and even went 16 for 18 at the net.

He also attacked his 19-year-old friend's second serve pitilessly, with Auger-Aliassime winning just 27 per cent of his second-serve points. And Auger-Aliassime went 0 for 5 on break-point opportunities on Shapovalov's serve.

Auger-Aliassime, who was the No. 18 seed (Shapovalov was unseeded), still hadn't processed exactly how the Shapovalov freight train had run over him, even an hour post match.

"I haven't really figured out where I'm going to go from here, like, what to think from that match. I don't even know what my emotions are. I don't know if I should be frustrated, sad. I'm not sure," Auger-Aliassime said.

"He just hit me with some really good tennis. I just had a nervous start. After I was fine. I just couldn't figure out what to do."

Shapovalov added Mikhail Youzhny, a former top-10 player from Russia who recently retired after a long career, for the tune-up event in Winston-Salem last week and for the U.S. Open.

Youzhny is new to coaching, but he has a "been there, done that," element Shapovalov has not had so far with his various coaches.

"The last 3-4 weeks I've been playing a lot better during my matches. And Mischa has helped me concentrate on a couple of things in my game to make sure I'm able to play my best tennis during these moments," Shapovalov said. "He’s definitely helped me a lot. He's been a great add the last couple of weeks."

As Shapovalov was rolling in the Grandstand, Davis Cup teammate Vasek Pospisil was at the other end of the Billie Jean King National Tennis Centre pulling off his finest victory in several years.

Pospisil, who had been off the court since last October and had back surgery in January, returned to action only at Wimbledon. He entered the U.S. Open on a protected injury ranking — his current singles ranking stands at No. 216.

It was the first fifth-set victory for Pospisil since he had three on his way to a quarterfinal result at Wimbledon in 2015.

"I actually had an issue the last couple of days, I was nervous coming into the match. It wasn't really back related. It was something with my hip," Pospisil said. "But I was telling a few people this is the best my back has felt since I had my injury in 2014. I mean, we'll see. Obviously knocking on wood again. But definitely the best I've felt since 2013."