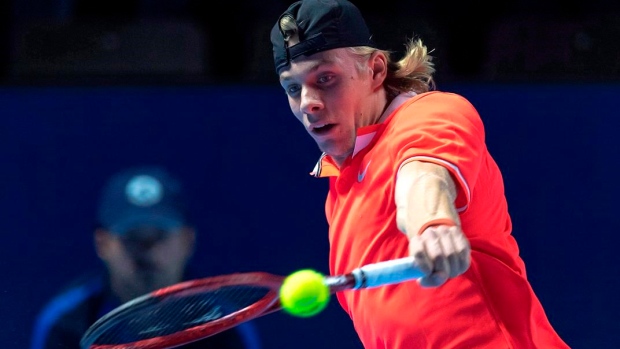 TOKYO — When it comes to the Japan Open, David Goffin is impressive. And that bodes well for his chances at next year’s Olympics.

The third-seeded Belgian, who reached the final in both of his previous appearances at the tournament in Tokyo, advanced to the quarterfinals Thursday by beating Canada's Denis Shapovalov 7-6 (5), 7-6 (2).

“I tried to break him during the match but I didn't. But I served really well, we were both really solid on our service games,” Goffin said. "It was 6-1 in both tiebreaks. In the first one I could have won it earlier but it was 6-5. Then I had another good tiebreak in the second so I'm happy with my performance and it was a good fight."

Goffin is the only former champion in the draw. He lost to Nick Kyrgios in the 2016 final before defeating Adrian Mannarino for the title in 2017.

Goffin won 77 per cent of his first serves and saved both break points he faced. He is now 11-1 in Tokyo and said he feels right at home at the venue that will be used for next year’s Olympics.

"I'm happy the Olympics are here in Tokyo because it's a city that I like," Goffin said. "I'm sure it will be different in July and August with the heat and humidity but I like the conditions here, I have some good wins here, so maybe next year will be a good opportunity to get some wins here."

The 32nd-ranked Shapovalov, a 20-year-old from Richmond Hill, Ont., is now 8-4 in his past 12 matches after a rocky stretch for a large chunk of the season. He is currently projected to drop four spots to No. 36 in next week's rankings.

Goffin will next face Hyeon Chung.

"I really wanted to reduce those unforced errors, make Lloyd have to work for every single point and try to neutralize that serve, because we know it's a cannon," Millman said.