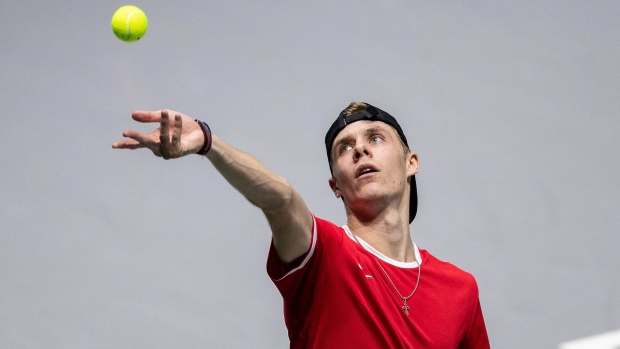 MADRID — Denis Shapovalov and Vasek Pospisil kept rolling on Monday, notching a pair of upsets to lead Canada to a win over Italy on the opening day of the inaugural Davis Cup Finals.

"I think it came down to the forehand on match point," Shapovalov said of his win over Berrettini. "Honestly it's an amazing win for me. Matteo's such an amazing player and he's had an unbelievable season. So for me to be able to get another win like this it's a huge confidence booster.

"It was a really tough match. ... So for me it's another step forward. And it just shows me where my game is at."

Berrettini and Fognini finished on a high note with a 6-2, 3-6, 6-3 win over Pospisil and Shapovalov in a doubles match. Italy made a late change to use their top two players in doubles instead of Simone Bolelli and Lorenzo Sonego in a bid to record a valuable match win in the new Davis Cup format.

The winners of each of the six three-team groups and the next two best teams advance to quarterfinals.

Earlier Monday, Pospisil recorded the biggest upset of the day.

Ranked 150th in the world after missing half the season while recovering from back surgery, Pospisil was a big underdog against world No. 12 Fognini.

"I've been playing well the last few months and I'm high on confidence and I feel like my game is in a good place and so is my head," Pospisil said. "So I'm just happy I delivered the first (win), it was a very important one, obviously. Best-of-three matches, every match is valuable so I'm just happy I got the team a winning start.

"And Denis played amazing too to get the 2-0 win. It would have been nice to get the doubles but that's how it goes when every match is very close."

Shapovalov, from Richmond Hill, Ont., and Vancouver's Pospisil both came into the Davis Cup Finals with momentum.

Pospisil, whose ranking tumbled while missing the first half of the year following back surgery, won a pair of Challengers in the U.S., this fall. That came after the former world No. 25 made a run to the round of 16 at the Shanghai Masters and notched first-round upset of then-No. 9 Karen Khachanov of Russia at the U.S. Open.

Shapovalov, 20, captured his first career ATP Tour title at the Stockholm Open last month before reaching the final at the Paris Masters.

Shapovalov fought off three set points in the first set against Berrettini, a semifinalist at this year's U.S. Open.

The Canadian seemed to enjoy playing in front of boisterous Italian fans, putting a hand up to his ear at one point to encourage noise.

It was Shapovalov's fourth career win against a top-10 opponent, with three coming this year.

"I love the atmosphere," Shapovalov said. "I think at a time like this, the end of a season you're not really looking forward to playing events ... but to play Davis Cup and the atmosphere is like this, you walk out and it's so hectic, it's like nothing that we experience. And for me it's just fun to get into it."

Tennis Canada says Auger-Aliassime could return later this week. The world No. 21 was in the stands for the matches on Monday.

Canada is without world No. 31 Milos Raonic (back).

It is the first year of the Davis Cup Finals, a week-long event in a neutral venue.

The old format had the competition run over several weekends during a full-year cycle. Previously, ties were best-of-five contests played at the home of one of the competing teams.

"Coming here the first time this (format) was going to be run, nobody knew what to expect but I'm actually really surprised how well it's run and I like the format," said Canada's captain Frank Dancevic. "I think it's good. I think it's fun, all the teams in one spot. ... I thought the crowd was into it today, maybe not exactly the same as when you're playing at home, but overall I prefer this system over the old one."

Canada, the United States and Italy are in Group F.

Canada faces the U.S., on Tuesday.