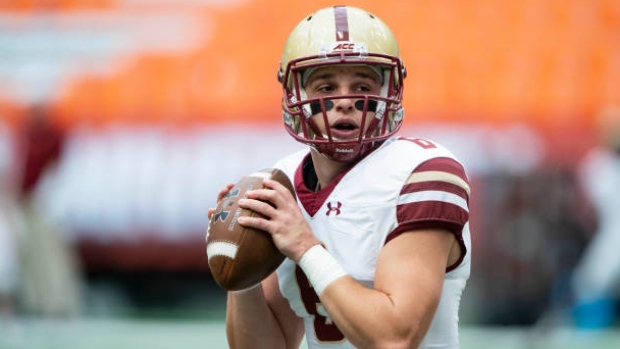 Boston College (5-4, 3-3 Atlantic Coast Conference), which had dropped three of four, stunned the Orange with big play after big play in the decisive second quarter, racking up 294 yards and scoring 34 points.

Dillon, who scored three touchdowns, rushed for 242 yards on 35 carries to boost his season total to 1,286. He entered the game ranked fourth nationally in rushing yards and rushing yards per game (130.5) for a unit that was averaging 255.6 yards on the ground. Bailey added a career-high 172 yards rushing on 16 carries.

BC set a school record with 691 yards offensively, averaging 9.2 yards per play. The Eagles’ 496 yards rushing were the most ever allowed by the Orange. The previous record was 457, set by West Virginia in 2006. BC’s record for rushing yards in a game is 518 against UMass in 1973.

Grosel started the carnage with a 64-yard touchdown pass to Kobay White on the first play of the second quarter to tie the game at 17-all. Using the play-action pass to attack a defense braced for the Eagles staunch run game, Grosel hit Zay Flowers for a 50-yard score after Andre Szmyt’s 20-yard field goal had given the Orange (3-6, 0-5) their last lead in the game.

Both White and Flowers were wide open behind a confused secondary, and then Dillon ripped off a 51-yard run, going untouched through the left side of the line and breaking free. Bailey followed with a 74-yard run and Grosel hit Isaiah Miranda for a 4-yard touchdown in the final minute for a 44-20 halftime lead.

BC outgained Syracuse 484-196 in the opening half, 336 of that on the ground, to easily overcome two turnovers.

Tommy DeVito hit Aaron Hackett and Trishton Jackson with touchdown passes for the Orange in the first quarter, Jackson’s 26-yard catch giving the Orange a 17-10 lead in the final minute. Jackson also had an 85-yard touchdown reception late in the third.

BC entered the game tied for seventh nationally and atop the ACC with North Carolina State with just six turnovers and committed two in the first quarter as the Orange forced two fumbles to boost their season total to nine fumble recoveries. Orange safety Andre Cisco got the first and defensive back Trill Williams the second, and the offense produced 10 points off the BC miscues.