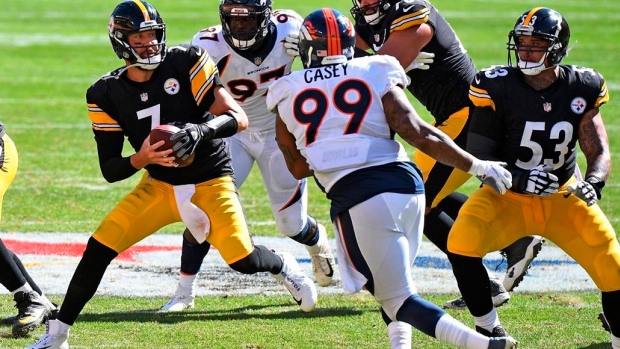 ENGLEWOOD, Colo. — Another day, another season-ending injury for the snake-bit Denver Broncos.

This time, it’s five-time Pro Bowl defensive lineman Jurrell Casey, who tore a biceps tendon against Tampa Bay in just his third game since the Broncos acquired him from the Titans in the off-season.

Coach Vic Fangio said Monday that Casey, whose injury was never noted Sunday, got hurt in the second half of Denver’s 28-10 loss to the Buccaneers but managed to finish the game.

“When I was watching the tape last night I saw the play where it happened. You could see him reach for his arm,” Fangio said. “With a lot of injuries, they don’t seem as bad as they end up being and guys are able to finish a la Bradley Chubb last year who finished the game when he had torn his ACL.”

Casey is the sixth starter the Broncos (0-3) have lost to injury, a cascade that began with linebacker Von Miller’s dislodged ankle tendon just before the opener that required surgery and is expected to sideline him until 2021.

That group has been to a combined 16 Pro Bowls. The only other player on the roster who has been to the league’s annual all-star game is two-time Pro Bowl running back Melvin Gordon.

“Injuries are a part of the NFL,” Fangio said. “We’ve just got to keep moving on. Next guy up will have to go in there and play good. The rest of the team will have to play good around everybody else. We’ll find the guys that are going to go out here. I’m confident that they’ll play hard and give us every effort that they have.”

The Broncos visit the New York Jets (0-3) on Thursday night and Fangio said he's still undecided between quarterbacks Jeff Driskel and Brett Rypien as his starter.