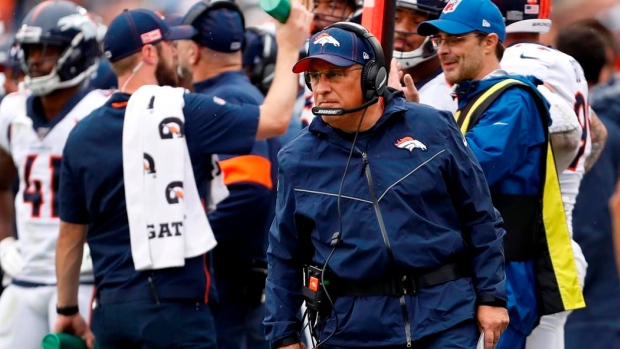 “After reflecting on my comments yesterday and listening to the players this morning, I realize what I said regarding racism and discrimination in the NFL was wrong,” Fangio said in an apology posted on the team’s Twitter account Wednesday.

“While I have never personally experienced those terrible things first-hand during my 33 years in the NFL, I understand that many players, coaches and staff have different perspectives,” Fangio added. “I should have been more clear and I am sorry.”

Fangio said he only meant to convey that in his experience, those ills didn't exist in locker rooms or on the playing field where teams rallied behind common goals. “Unfortunately, we don’t live or work only within those confines,” Fangio said. “Outside of those lines -- both in the NFL and society -- there is a lot of work to be done in the areas of diversity and providing opportunities across the board for minorities.”

He concluded his lengthy apology by saying, “I look forward to listening to the players -- both individually and collectively -- to support them and work hand-in-hand to create meaningful change.”

Fangio, a 61-year-old white head coach, faced plenty of blowback on social media and was criticized as being tone-deaf after his comments in a video call with members of the media on Tuesday. He had suggested discrimination and racism weren’t issues in the NFL.

Seahawks safety Quandre Diggs tweeted, “Is he blind??” and his teammate, running back Chris Carson, called Fangio “a joke.” Diggs and Carson are black.

Hall of Fame coach Tony Dungy told ESPN’s Golic and Wingo that while he concurred with Fangio’s view of an NFL meritocracy on the playing field, the league wasn’t immune to society’s ills. “To say there’s no racism and no problem, I think, really is not recognizing the situation,” Dungy said.

Fangio began Tuesday’s call with a repudiation of the white police officer in Minneapolis who was charged with murder in the death of George Floyd, a black man who was handcuffed.

Fangio on Tuesday called Floyd’s death “a societal issue that we all have to join in to correct,” and he added that he’s encouraged his players to peacefully protest such injustices. He also said professional sports offers society a blueprint of sorts on how to better get along because coaches, players and staff from diverse backgrounds unite in common quests.

Later in the call, Fangio was asked about the evolution of player activism over racial injustice and excessive use of force against minorities. He responded, “I think our problems in the NFL along those lines are minimal. We’re a league of meritocracy. You earn what you get, you get what you earn. I don’t see racism at all in the NFL. I don’t see discrimination in the NFL. We live in a great atmosphere. Like I alluded to earlier, we’re lucky. We all live together joined as one for one common goal, and we all intermingle and mix tremendously. If society reflected an NFL team, we’d all be great.”

Critics said that statement ignored the dearth of NFL minority head coaches, general managers and team presidents as well as QB Colin Kaepernick’s inability to land an NFL job after he sparked a movement by kneeling during the national anthem in 2016 to call attention to social injustices and excessive use of police force against minorities.