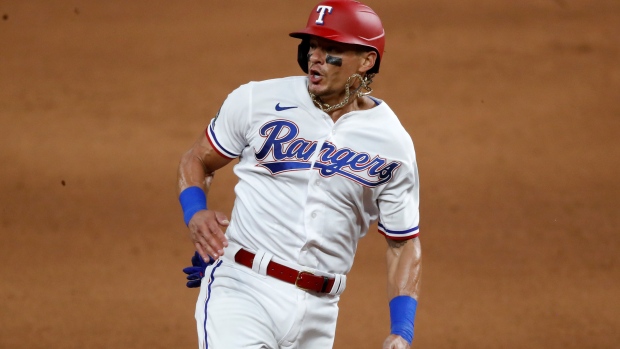 ARLINGTON, Texas — Derek Dietrich talked a few hours before his Texas Rangers debut about just wanting to make some kind of impact for his new team.

The veteran infielder certainly did in a big comeback against the Seattle Mariners.

Dietrich reached base all four times, had a big stolen base and scored twice for the Rangers, who overcame an early four-run deficit for a 7-4 win Wednesday night, wrapping up a homestand when they won five of six games.

“That eighth inning, that was fun. I was pumped up,” Dietrich said. “It felt good to feel that again. It’s been a little bit.”

A one-out single by Dietrich off hard-throwing Erik Swanson (0-1) got Texas’ five-run eighth going before Elvis Andrus, mired in a 2-for-23 slump, doubled into the left field corner and pinch-hitter Todd Frazier was hit by a pitch to load the bases. Dietrich scored when No. 9 batter Jeff Mathis had a bloop single before Shin-Soo Choo’s game-tying sacrifice fly. Frazier scored the go-ahead run on a wild pitch by Taylor Williams, who had just entered. Willie Calhoun, already with an RBI hit an inning earlier, added a two-run single.

Dietrich had three hits and was hit by a pitch, becoming the first player since rookie Joey Gallo in June 2015 to reach base safely four times in his Texas debut.

“You see the energy he brought,” manager Chris Woodward said. “He’s got a ton of energy. A great game for him to start off.”

Jonathan Hernandez (3-0), the fourth Texas pitcher, pitched a scoreless eighth before Rafael Montero’s perfect ninth for his fourth save in as many chances.

Seattle scored all of its runs in the second off Jordan Lyles. Austin Nola led off by lining a 424-foot homer into Seattle’s bullpen in left-centre before Shed Long Jr. walked. Daniel Vogelbach then made it 3-0 when he pulled a 442-foot shot into the right field seats — well beyond the five rows of cardboard cutouts of fans. Kyle Lewis later added a sacrifice fly.

After getting his release from the Chicago Cubs last weekend, and 721 big league games the past seven seasons for Miami and Cincinnati, Dietrich joined the Rangers and initially signed a minor league deal so he could work out. He got added to the roster Tuesday, a day before starting in place of struggling second baseman Rougned Odor, hitting .116 this season with only two hits and 13 strikeouts his last 29 at-bats.

Dietrich was hit by a pitch with two outs in the sixth and stole second base before scoring on J.P. Crawford’s throwing error when Andrus hit a grounder. Seattle’s shortstop then made a spectacular inning-ending play, diving up the middle on another chopper and while still on the ground scooped the ball from his glove to second baseman Long for the forceout.

Asked about his plans for Dietrich when Texas plays again, Woodward responded, “I’ll get him in there somewhere, whether that’s at first or second. I know he can play third as well. I’ll figure out some way to get him in there."

The Rangers have gone four games without a home run for the first time since September 2015. It's been 157 plate appearances since Gallo homered on Saturday. ... Seattle made its only trip this season to the Rangers new ballpark.

What Woodward called a “huge victory for so many reasons” was what Mariners manager Scott Servais termed a "tough one to let get away. I thought Taijuan Walker was awesome. ... Obviously we didn’t have enough to hold on right at the end, but these games are so important for us. We’re putting guys in situations they’ve never experienced before.“

Taijuan Walker allowed only an unearned run and scattered six hits over six innings, with five strikeouts and one walk. It was the fourth start in his return to Seattle, which traded the right-hander to Arizona after the 2016 season, after making only four starts combined the past two seasons for the Diamondbacks because of his Tommy John surgery in April 2018. ... Lyles allowed 11 base runners in his five innings — six hits, four walks and a hit batter.

Rangers: RHP Jimmy Herget was recalled from the alternate training site when RHP Nick Goody (back spasms) was put on the 10-day injured list. ... C Robinson Chirinos was out of the lineup for the second game in a row, and before a scheduled off day Thursday, because of left ankle soreness.

Mariners: After being the only American League team to play 20 games in 20 days to start the season, Seattle has a day off Thursday before opening a three-game series Friday in Houston.

Rangers: Open a three-game series Friday at Colorado, which won 2 of 3 at Texas to start the season.