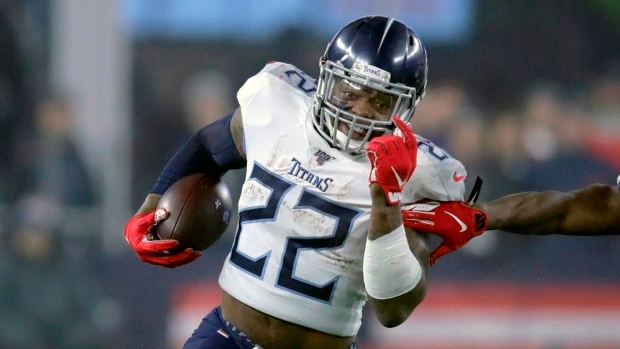 In two games against them, the Tennessee Titans star has averaged 2.5 yards a carry, about half of his 4.8-yard average across four NFL seasons.

When the teams meet Monday night, Henry will line up against former teammate Jurrell Casey, who’s clogging up the running lanes in Denver following his off-season trade from Tennessee.

Watch Steelers/Giants at 7pm et/4pm pt followed by Titans/Broncos as Monday Night Football kicks off with a doubleheader on TSN1/3/4, TSN.ca, the TSN App and on TSN Direct.

Even with Casey on his side last year, Henry was stifled in a 16-0 loss at Denver, gaining just 28 yards on 15 carries. That was easily the low point in a season in which Henry ran for an NFL-best 1,540 yards.

“Really not dwelling on last year,” Henry said. “We know what type of game it was last year and move on from that. We’re preparing for this week, ready to travel to Denver, play against a good team, a good defence, a physical team, a pretty sound team and just compete this week.”

The Titans changed quarterbacks, benching Marcus Mariota for Ryan Tannehill midway through their defeat in Denver last Oct. 13. They went 9-4 the rest of the way, ended Tom Brady’s career in New England and gave Kansas City a scare in the AFC championship. That run helped Tannehill earn a four-year, $118 million extension and Henry a four-year, $50 million deal.

Those big contracts undoubtedly played a role in Tennessee dealing Casey, a five-time Pro Bowl defensive lineman, to Denver for a seventh-round pick in one of the bigger shockers of the off-season.

“Jurrell is like a brother to me,” Henry said. “He’s a disruptive player, I think we all know what type of player he is. You’ve definitely got to prepare for him, and excited to go against him on Monday night.”

Casey has been looking forward to playing his former team even though he knows corralling Henry could be one of the tougher tasks in the league.

“The biggest thing is having all those guys to the ball. That’s one. When (Tannehill) hands the ball off to him, every guy’s on that pile, every guy’s tackling him. If we build a wall up front it makes the game a lot easier,” Casey said. “It’s when that dude gets the open lanes and starts hitting downhill and starts making those DBs and second-level guys miss is when you start getting in trouble.

“Our biggest thing is making sure we up front are building that wall, getting off blocks and making sure he’s not getting just one or two guys, little guys, trying to make tackles. Us big guys have to make sure we’re there.”

“Having a player of his calibre and his leadership not be out there with us is definitely going to be a blow to the team," Casey said. "At the end of the day this business is about adapting to situations. We’ve all been forced into having to adapt to something with the whole COVID that’s going on.

“It’s just another challenge and another hurdle we have to get over and come together as a team ... For me, it definitely sucks to have someone like that who you expect to be out there and take the pressure off you a little bit to get to the quarterback and help you set the edge, stuff the run up the middle.”

The Broncos tried to lure Clay Matthews III to Denver after Miller got hurt but he turned them down.

“He’s a game wrecker,” Henry said. “He can change the tone of the game by his play. Physically, he’s a big guy. He’s an impact player, somebody that you’re going to have to game plan for. ... I’m just excited he’s on our team now and he can help us win games.”

Casey wants to make sure when the game’s over Monday night, Henry is wishing that Casey was still in a Titans uniform.

Casey was bitter at first about how the Titans handled his departure, leaving it to his agent to inform him he was being shopped around. But he’s settled into his new surroundings and now all the buzz is about who will have the advantage Monday night.

"Let’s just say we’re going to come into this game and make sure it’s a great battle. We’re going to get after it. At the end of the day, I’m going to make sure the Broncos are on top.”