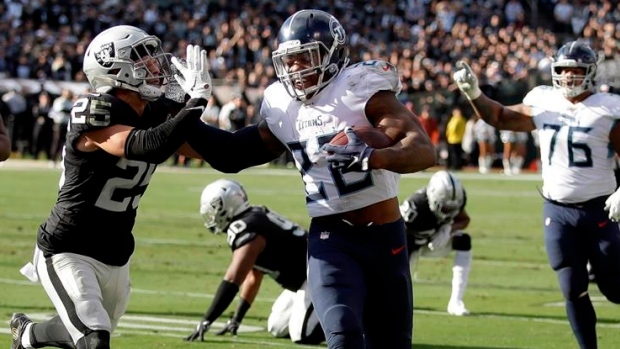 NASHVILLE — Tennessee running back Derrick Henry is questionable for the Titans' AFC South showdown with the Houston Texans.

Henry has not practiced all week with a sore left hamstring that limited him in th e Titans' 42-21 win over the Oakland Raiders last week despite him running for 103 yards and a touchdown. Henry currently ranks second in the NFL with 1,243 yards rushing and is tied for the league lead with 13 TD runs.

First place in the AFC South is on the line when the Titans (8-5) host the Texans (8-5). The teams will play each twice in the final three weeks of the season.

The Titans also said Friday that starting safety Kenny Vaccaro is questionable for Sunday's game. Vaccaro has to clear the concussion protocol after practicing fully Thursday and Friday. Cornerback LeShaun Sims is questionable after missing the past two games with an injured right ankle. He also practiced each day this week.

Tennessee will be without starting cornerback Adoree' Jackson for a second straight game because of an injured foot. Wide receiver Adam Humphries (ankle) and linebacker Daren Bates (shoulder) also will miss their second consecutive game.