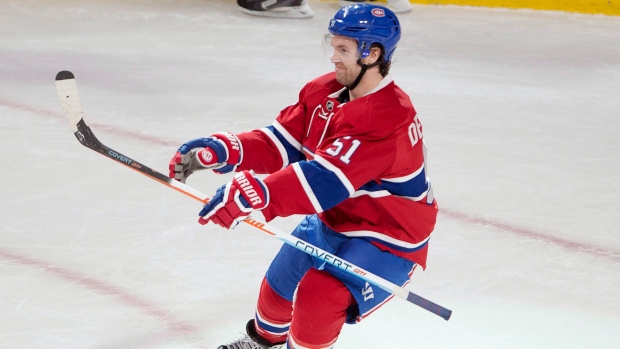 MONTREAL - A short-handed goal by Lars Eller turned around a game that looked lost for the Montreal Canadiens.

Trailing 3-0 and with Brian Flynn off for roughing, Eller opted to shoot on a two on one with Devante Smith-Pelley and beat Jacob Markstrom to put Montreal on the board at 8:40 of the second period.

A goal from Max Pacioretty and a late tally from Tomas Fleischmann tied the game and David Desharnais got the winner 3:25 into overtime as the Canadiens downed the struggling Vancouver Canucks 4-3 on Monday night.

"Lars' goal was big for us, it woke everybody up," said Desharnais.

Before then, Montreal looked headed toward an a second straight embarrassing loss on home ice after a 6-1 drubbing at the hands of the Colorado Avalanche on Saturday night.

Instead, the Canadiens improved to 14-3-2 with their first OT win of the season.

"It was important," said Eller. "We'd rather be up 3-0, but it was the first time this season we came back from being down like that, so it's very satisfying. It builds confidence in the room.

Fleischmann, playing his 600th NHL game, beat Markstrom on a rush down the right side to tie the game at 16:52 of the third period.

Desharnais completed a tic-tac-toe play with P.K. Subban and Fleischmann on a rush with a one-timer from the right side for the winner.

Adam Cracknell and Jared McCann scored in the first frame and Daniel Sedin had a power-play goal early in the second for the Canucks (7-6-6), who dropped to 1-3-2 on a seven-game road trip that ends in Winnipeg on Wednesday night.

"We've got to be positive," said Canucks captain Henrik Sedin, whose team was outshot 36-26. "I thought tonight was probably our best road game of the year.

"I thought we played really well. We gave up that short-handed goal and that kind of turned things around but we're a young team. We have to learn from our mistakes. In moments like that, we're still up 3-1 and we've got to keep going."

It was Vancouver's sixth overtime loss of the season and Sedin said "we have to be better three on three."

It was the Canucks that ended Montreal's nine-game winning run to start the season with a 5-1 decision in Vancouver on Oct. 27. Since then, Montreal is 5-3-2.

It looked like the Canucks would do it again when Derek Dorsett bumped Jeff Petry and the puck slid to Cracknell for a goal into an open side only 1:26 in. It was the fourth straight game the Canadiens allowed an early goal.

Brandon Gallagher was serving four minutes for a high stick that drew blood from Daniel Sedin when his brother Henrik fed the puck across to McCann for a goal into an open side at 17:54.

Daniel Sedin's shot 3:18 into the second period went off Mike Condon's stick and lodged in the stitching at the top of the net. The power-play goal needed video review to show it was in the net.

After Eller scored, Pacioretty added one at 10:53 when he collected a loose puck and backhanded it in.

The Canucks were without Alexandre Burrows, whose wife was having a child, as well as former Canadien Brandon Prust and Brandon Sutter. Hunter Shinkaruk played his first NHL game.

Alexei Emelin sat out a second game for Montreal with a lower body injury.