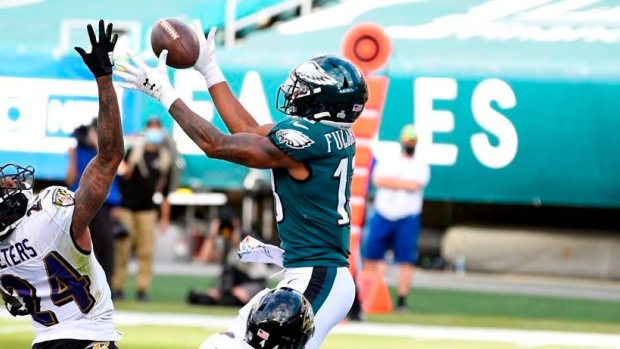 PHILADELPHIA — It’s Week 7, the Philadelphia Eagles and New York Giants each have one win and both teams are right in the mix for first place.

Welcome to the NFC East.

A division that has produced more Super Bowl champions (13) than any other is the worst in the NFL this season with five combined wins.

“Everything is still kind of up for grabs and we’re just trying to figure out how to win a game and how to get guys healthy to play," Eagles coach Doug Pederson said.

The Eagles have been depleted by injuries, finishing a 30-28 loss against Baltimore with only quarterback Carson Wentz and centre Jason Kelce healthy among the preseason starters on offence.

Right tackle Lane Johnson and wide receiver DeSean Jackson are expected to return for this game but running back Miles Sanders and tight end Zach Ertz are out after getting hurt against the Ravens.

The Giants are coming off their first win under coach Joe Judge. They haven’t won in Philadelphia since 2013 and have lost seven straight in the series but they’re facing an undermanned club.

“You want to play teams when they’re at their best,” Judge said. “That’s what competition is all about. ... They know how to use their receivers, their backs and their tight ends all very well, so it doesn’t matter who’s in there. They’re all very capable.”

GIVE IT TO BOSTON

With Sanders out, Boston Scott will be Philadelphia’s primary back. Scott emerged from the practice squad last year and had his two best games against the Giants, including a career-high 138 scrimmage yards and three TDs in the division-clinching win in Week 17.

Scott is averaging just 3.2 yards per carry behind a banged-up offensive line. He has seven catches for 48 yards.

“I’m definitely ready,” Scott said. “I know everyone is going to be firing on all cylinders and I’m looking to contribute any way I can.”

Judge, who coached at Alabama and New England before going to New York, is a Philadelphia native. He went to Lansdale Catholic High School and most of his family are Eagles’ fans.

The 38-year-old quipped he was going to wear a hard hat at the game to be safe from family members tossing batteries at him. Others have asked for tickets.

“My only rule is anybody who shows up that I either grew up with or have blood ties with, they have to wear blue,” Judge said. “I respect their love for the Eagles from being in the town, but hey, look man, you ain’t showing up cheering against my kids’ Christmas. You better come out in some blue cheering for us.”

Wentz completed just four passes of 40 or more yards to wide receivers all of last season, none between Week 3 and 16. He already has three this season. Rookie Jalen Reagor had a 55-yard catch in the opener. Second-year pro Travis Fulgham caught a 42-yard TD pass in a win at San Francisco three weeks ago. Rookie John Hightower had a 50-yard reception last week against Baltimore and also dropped a perfect throw deep that would’ve been at least a 50-yard gain.

“The ability to stretch the field and create big plays is a game-changer,” Wentz said.

HELP ON THE WAY

New York quarterback Daniel Jones was 12 of 19 for 112 yards with a touchdown and an interception against Washington. The attempts, completions and yards were the lowest in his 18 career starts.

His wide receivers had five catches for 61 yards with Darius Slayton catching two, including a touchdown.

Veteran receiver Sterling Shepard, who was placed on injured reserve after Week 2 with a turf toe injury, practiced Tuesday. He had eight catches for 76 yards in two games.