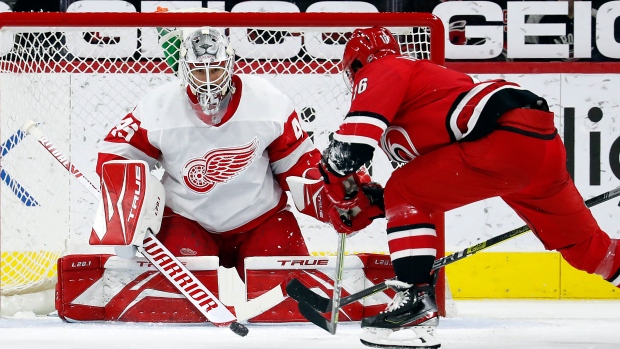 RALEIGH, N.C. — The Detroit Red Wings emerged from a stressful few days before the deadline with yet another standings-defying win against the Carolina Hurricanes.

Detroit, sitting at the bottom of the division, won here in a shootout on Saturday then earned a fourth win in seven meetings this season Monday — which also spoiled Carolina captain Jordan Staal's 1,000th career regular-season NHL game.

It came after the Red Wings completed four trades since Friday, the biggest sending right wing Anthony Mantha to Washington before the Monday afternoon deadline. The potential for more moves left coach Jeff Blashill waiting until “really late” to post his lineup.

“The stress was I guess behind us and we could focus on the game tonight,” captain Dylan Larkin said.

"We were in a 0-0 game going into the third and a lot of times this year and in the past, you've seen that go the other way. But I've said we've have to start finding ways to win those games, and we did tonight.”

To Larkin's point, Detroit had been outscored 57-33 in the third period before Monday.

Erne scored off a behind-the-net feed from Michael Rasmussen less than a minute into the third. That was the start of a game-turning sequence that saw the Hurricanes take two quick penalties to give the Red Wings a chance to strike again.

The Hurricanes unsuccessfully challenged the goal seeking a missed offside call on Erne. That led to an delay of game penalty, followed by another when Brady Skjei's clear attempt sailed over the glass — potentially glancing off the stick of Detroit's Evgeny Svechnikov — to give Detroit a two-man advantage.

The Hurricanes survived the 5-on-3, but Rasmussen slipped the puck to Zadina on the right side to beat James Reimer for the 2-0 lead at 2:34 of the third.

That lead held up, with Nino Niederreiter getting Carolina on the board to make it 2-1 at 13:54 of the third. But the Hurricanes couldn't beat Bernier again, then Gagner finished it off with his empty-net score in the final minute to seal it.

Reimer finished with 27 saves for the Hurricanes.

“We were not good,” Carolina coach Rod Brind'Amour said. “I coached a terrible game because I didn't get the lines going right, I couldn't find the right matchups. It was no good from start to finish. And we got what we deserved in that one.”

In a bit of perfect timing, Jordan Staal's brother, Marc, was on the opposite bench for his milestone night that began with a pregame ceremony.

The Hurricanes took the ice all wearing Staal’s No. 11 jersey before the ceremony that included taped video messages from former teammates such as Sidney Crosby, Cam Ward, Justin Williams and brothers Jared, Eric and Marc Staal.

“I think that's what hurts the most: I mean, it was a big night for Jordan,” Niederreiter said, adding: “We showed up like that, it's definitely not acceptable.”

The NHL's trade deadline passed a few hours before the puck dropped in this one.

The Hurricanes traded defenceman Haydn Fleury to the Anaheim Ducks for defenceman Jani Hakanpaa and a sixth-round draft pick in 2022. That gave Carolina a physical boost to the blue line with the 6-foot-5, 218-pound Hakanpaa.

As for the Red Wings, their deadline-day trade moved Mantha for wingers Richard Panik and Jakub Vrana as well a first-round draft pick this year and a second-rounder next year.

“I wished him great luck,” Blashill said of Mantha, who had played his entire NHL career in Detroit. “I think he's going to be a real good fit in Washington.”

Detroit: The Red Wings return home Thursday for the first of two straight games against Chicago.

Carolina: The Hurricanes open a two-game home set with Nashville on Thursday, followed by the second game Saturday to close an eight-game homestead.