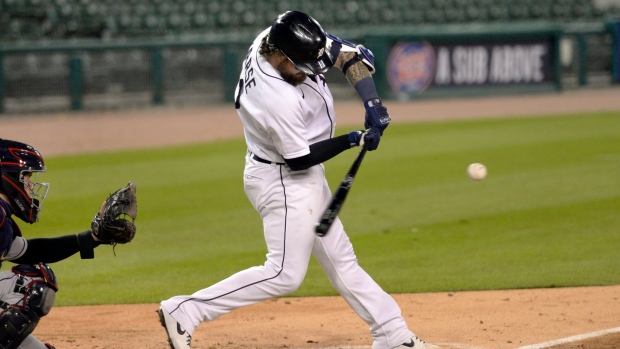 DETROIT — Jose Ramirez hit a two-run double in the third inning, and for a while it looked as if that would be enough for Cleveland.

Cleveland's lack of offence proved costly Saturday night when they allowed four runs in the eighth inning and lost 5-2 to the Detroit Tigers.

Cleveland beat the Tigers 1-0 on Friday, but they were unable to hold on for another one-run victory a night later. They appear headed to the post-season and have some imposing starting pitchers, but they might not last long if they don't hit.

“We had opportunities, tough breaks, too," stand-in manager Sandy Alomar Jr. said. “We had a line drive to first base, couldn’t get that runner in.”

Ramirez lined into a double play in the eighth with men on first and third and Cleveland up 2-1. Then Eric Haase and Daz Cameron hit RBI singles during Detroit's big bottom half. The Tigers won their first game following manager Ron Gardenhire's retirement.

Gardenhire abruptly stepped down before the game, saying it had been a stressful season for him and that he needed to focus on his health.

“He’s one of the persons that I admire the most as a manager, as a coach when he was with the Minnesota Twins,” Alomar said. "He’s a respected person in the baseball industry.”

With men on first and second and one out in the eighth, Haase singled up the middle against his former team to tie it at 2. Cameron followed with a sharp base hit to right off Phil Maton (2-3). Victor Reyes brought a run home with a bases-loaded walk, and Willi Castro added a sacrifice fly.

Jose Cisnero (3-3) got out of the eighth when Ramirez lined into the double play, and Bryan Garcia struck out three in the ninth for his third save.

The loss snapped a streak of 12 straight victories for Cleveland at Detroit's Comerica Park. The Indians are 64-20 against the Tigers since the start of the 2016 season.

Detroit starter Spencer Turnbull allowed five hits in six innings. He struck out seven with no walks and said he tried his best to stay focused after the news about Gardenhire.

“I just love him, man. He's been nothing but good to me,” Turnbull said. “One of the best there is.”

“Going out there and competing from Pitch 1 to pitch whatever it is — I think I tried to do a good job of that tonight,” said McKenzie, who threw 79 pitches.

Harold Castro put the Tigers up 1-0 with an RBI double in the first.

Bench coach Lloyd McClendon took over as Detroit's manager for the remainder of the season.

“We didn’t want to use him tonight,” Alomar said. "We patched up fifth, sixth and seventh pretty good. The eighth, unfortunately, the walks and the hits. It was one of those things where he got in trouble and couldn’t recover.”

Tigers: C Austin Romine had the night off after hurting his wrist Friday.