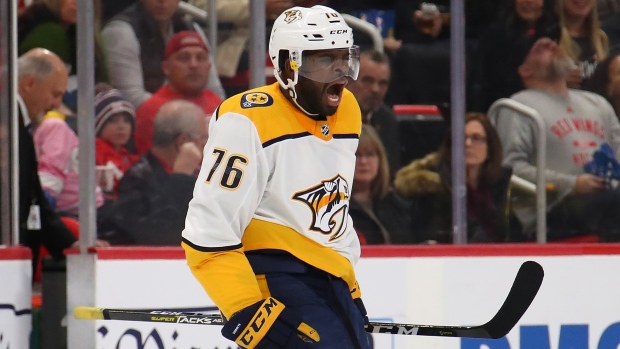 VANCOUVER — Ray Shero said before the NHL Draft to “expect the unexpected.”

He wasn’t kidding. He brought the end to the P.K. Subban Experience in Music City.

For Nashville, the deal equaled little more than a salary dump. They shed all of Subban’s $9 million salary in exchange for defencemen Steven Santini and Jeremy Davies as well as two second-round picks.

“We had to make a business decision,” Predators GM David Poile said in a statement. “With an aim at strengthening our forward corps this offseason, and the continued strength of our defensive group, we felt it was necessary to clear up salary cap space this way.”

In the days leading up to the NHL Draft, the Predators notified interested parties they would be willing to retain up to $3 million of Subban’s salary to facilitate a deal.

The Toronto Maple Leafs were undoubtedly interested in the native son Subban for their right side, but even at $6 million, he became a bit rich for a team desperate for cap breathing room to re-sign Mitch Marner, Kasperi Kapanen, Andreas Johnsson - among other changes they’d like to make on defence.

Poile’s former protege, Shero, entered Day 2 of the Draft with the most salary cap space in the league at north of $36 million and made use of it. They weren’t forced to pay as high an acquisition cost because they swallowed all of his salary.

Subban’s departure headlined a busy Saturday morning in Vancouver. No players were traded during Round 1 on Friday night for the first time since 2005, but three deals were consummated before the Senators kicked off Saturday with pick No. 32.

Subban, 30, appeared to fall out of favour in Nashville nearly three years to the day after arriving from Montreal in a seismic swap for Shea Weber.

The two crossed paths one last time in Vancouver, with “Man Mountain” Weber announcing the Habs’ 5-foot-7 first-round pick Cole Caufield on stage, and Subban getting traded during Draft proceedings.

Given how Subban’s tenure began with such a splash in Nashville, he went out with a whimper. He arrived with his likeness on billboards. But his name was quickly in the rumour mill, which churned with rumblings that the exuberant Subban didn’t mesh well with his teammates.

The return for Subban calls to mind what Canadiens GM Marc Bergevin said in 2016 after trading the larger-than-life personality.

The ridicule Bergevin felt when the Predators played for the Stanley Cup in Subban’s first season has also subsided.

Weber, 33, rebounded nicely from a significant foot/ankle injury and steadied Montreal’s blue line with a 33-point campaign in just 58 games. He is trending upward.

Meanwhile, Subban has significant question marks surrounding his game after an injury-riddled season. He collected just 31 points in 63 games and some wonder how much his back injury will hinder the final three years of his contract.

Subban admitted in April that last season was a disappointment and he acknowledged a trade might be on the horizon.

“If I'm talking facts, I'm the highest paid player on this team,” Subban told reporters then. “With that comes responsibility. Just like everybody else, the responsibility is on me to take the fact that we didn't win the first round; we didn't accomplish what we wanted to accomplish.”

The Predators voided Subban’s no-movement clause given by the Canadiens, the one that was due to kick in days before they traded him, and that left him with no measure of control in his landing spot.

He ended up across Hudson from all that Manhattan has to offer, where he can continue to flourish off the ice as one of the NHL’s most marketable names.

Subban will also add plenty of juice to the rejuvenated Hudson River rivalry. After the Devils took Hughes at No. 1 and the Rangers went with Kaapo Kakko at No. 2, the Devils held serve with Subban after New York traded for Jacob Trouba earlier in the week.

And now the Predators, free of Subban, can set their sights on free agency and Matt Duchene.