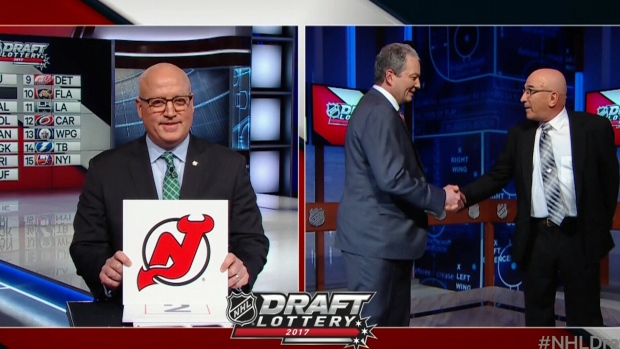 TORONTO — The New Jersey Devils were the big winners of Saturday's NHL Draft Lottery moving up from No. 5 to earn the top selection in June's NHL Draft, much to the surprise of general manager Ray Shero.

The Devils, who finished 27th overall this season with a 28-40-4 record, had an 8.5 per cent chance of winning the lottery.

"You know what your odds are, it happens real quickly," said Shero. "For me, it's really great for our franchise and our fans, especially with what we're trying to do. Coming into today, we have 11 draft picks. Now we've got the No. 1 overall pick, which is a great building block for our franchise moving forward."

It marks the third time in draft lottery history that a team has moved from the fifth spot to No. 1 following the New York Islanders (2000) and Chicago Blackhawks (2007).

The Devils franchise has selected first overall once previously when the Colorado Rockies picked defenceman Rob Ramage in 1979.

The Flyers were the biggest movers at Saturday's lottery. Philadelphia came in with just a 2.2 per cent shot at the top pick and wound up with the No. 2 overall selection. Dallas rounded out the top three.

For a second consecutive year the Vancouver Canucks dropped in the lottery. Last year, the Canucks fell from third to fifth and selected defenceman Olli Juolevi of the OHL's London Knights.

This year, Vancouver, the league's 29th-placed team, entered the lottery with the second-best odds (12.1 per cent) at the first overall pick behind only the Colorado Avalanche, but will once again select fifth overall.

"You have an 80 per cent chance of not winning, and I think what we saw this year is going to be normal for the lottery," said Canucks president Trevor Linden. "Our best chance was to move down and we did."

Colorado entered the day with the best odds at the first overall pick with an 18 per cent chance after finishing the season 30th overall, but dropped to fourth.

Centres Nolan Patrick of the WHL's Brandon Wheat Kings and Nico Hischier of the QMJHL's Halifax Mooseheads were the top two rated players amongst North American skaters for this year's draft according to NHL Central Scouting.

Both players are expected to be NHL-ready for the fall.

"I think they're both great players and certainly different," Shero said. "One's from Switzerland (Hischier) and one's from Canada (Patrick). Patrick certainly has lineage, his father (Steve) played and so forth. He's been through injury this year, but everybody knows he's a heck of a player. (Alex) Galchenyuk in his draft year (2012) didn't really play.

"You get a Swiss kid, you see him, a centre iceman whose got size and talent. For us, as a franchise, you've got some real good players here."

For the first time the Vegas Golden Knights were participants in the NHL Draft Lottery.

The expansion club, which will begin play next season, were given the same lottery odds as the team finishing the regular season with the third-worst record (the 28th-place Arizona Coyotes).

Vegas will have the sixth overall selection while Arizona will pick seventh at the 2017 NHL Draft, which will be held at Chicago's United Center June 23 and 24th.