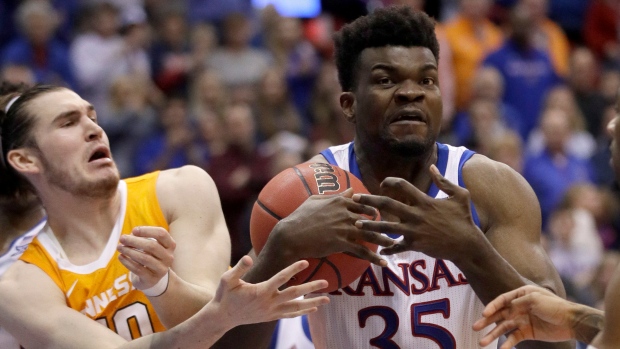 Devon Dotson scored 22 points, Udoka Azubuike added 18 and the Jayhawks beat Tennessee 74-68 in the Big 12/SEC Challenge. Azubuike was the lone big man for the Jayhawks (16-3) after Silvio De Sousa was suspended 12 games and David McCormack banned five for their roles in a brawl Tuesday against Kansas State.

“I thought today would’ve been the easiest game to get up for with the week that we had,” Self said.

After Azubuike went to the bench with two fouls early, Yves Pons hit consecutive 3-pointers to put the Volunteers (12-7) on a 14-2 run for a 20-13 lead. Kansas answered when Azubuike checked back in, stringing together a 12-0 run en route to a 37-30 lead at halftime.

“That stretch when (Azubuike) really got off was a pivotal point in the first half,” Tennessee coach Rick Barnes said. “I thought we were hanging on there at the end of the first half.”

Pons led the Volunteers with 24 points, and Jordan Bowden came alive early in the second half, knocking down three 3-pointers and finishing with 19 points after a scoreless first half.

Tennessee pulled within three late in the second half, but Azubuike had a block and hit four free throws late to keep the Volunteers in check.

Kansas: The pressure will stay on Azubuike, whose early foul trouble stalled Kansas’ offense and allowed for a substantial Volunteer run.

Tennessee: Only three Volunteers — Pons, Santiago Vescovi and John Fulkerson — scored in the first half, and Tennessee turned the ball over 15 times. Despite the offensive struggles, the Volunteers were able to stay within arms’ length.

After a 17-year tenure at Texas, Barnes returned to Allen Fieldhouse in search of an eighth win against Self. That would have given him the most victories of any current active coach against the Hall of Famer.

Winless in Allen Fieldhouse since Texas topped the Jayhawks 74-63 in 2011, Barnes remains tied with Michigan State’s Tom Izzo in head-to-head victories over Self.

“I love Rick Barnes,” Self said. “I think he’s terrific. I will always love competing against Rick’s teams.”

With the clock dwindling below five minutes and trailing 66-63, Barnes entered Uros Plavsic to foul Azubuike, an inconsistent free throw shooter at 42.4% on the season.

“Very subtly that may have been the biggest play of the game,” Self said. “Because it gave him confidence after making those two to go knock a couple more down.”

Azubuike finished 6 of 11 from the stripe, with four coming in the final five minutes.

“Those were big free throws, and you know what, maybe we made him get better today,” Barnes said.