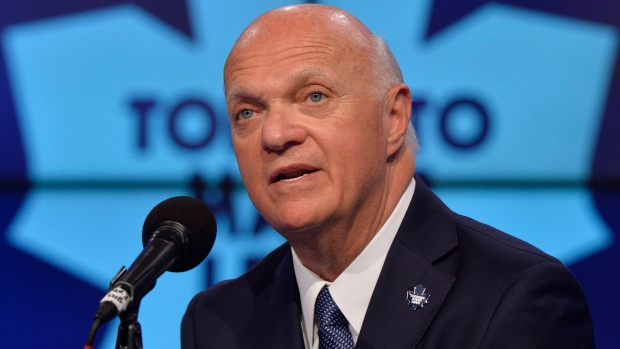 I don’t think I speak for myself when I say that Lou Lamoriello’s hiring by the Toronto Maple Leafs was, in one word, surprising. It’s not that Lou doesn’t have the resume or the credentials to slide comfortably into his new position, but rather that his hiring seems to run against the direction of this Maple Leafs ship – one that’s likely venturing into a couple of painful rebuilding years.

It strikes me as obvious that Toronto was looking for a veteran voice of sorts, a man with real hockey wherewithal who can become one of the four important figureheads for the early phases of this rebuild – the others, of course, being Brendan Shanahan, Kyle Dubas and Mark Hunter. If nothing else, Lou’s been able to build winners. In his 27-year reign, New Jersey made it to the playoffs 22 times, the Stanley Cup five times, and won it all three times.

But, if there’s one knock against Lou, it’s that the success of the Devils franchise under his rule seemed to diminish with time. Part of that, no doubt, is the aging out of so many of the stars that carried those great Devils teams in their heyday. Martin Brodeur, John MacLean, Scott Niedermayer, Bobby Holik, Scott Stevens, Zach Parise, and Ilya Kovalchuk come to mind, and that’s sort of just getting warmed up.

The problem here isn’t that the Devils experienced great roster turnover. You can work through most NHL teams and find comparable talent exoduses over the same timeframe.

The problem here is that the Devils have struggled mightily to replace those names, in large part because of the Devils’ considerable failures at the draft table.

Draft success and draft failure can’t possibly be bestowed on Lou, or any single man. Decisions are made after a lot of hours dumped in by scouting departments. Agreements are sometimes hard to come by. And, there’s a whole lot of randomness that goes into the draft in general. Even great eyes for talent can go through cold periods.

That said, it’s hard to not notice how the Devils deteriorated down the stretch. Lou – and longtime director of scouting David Conte, who you guessed it, has been linked to the Maple Leafs organization – either struggled to identify NHL-capable talent coming into the draft, or struggled to develop those players in the meaningful years thereafter.

It’s probably a combination of both. But, the numbers are discouraging. A look at each team’s total draft picks over the last twelve years shows that the Devils paled in comparison to most of the league. And that’s true if you’re isolating on rounds one through three, where most of the top-tier talent comes from, or rounds four through seven, where you’re trying to pin down potentially undervalued players who can compete at the highest level.

For purposes of this analysis, I’ve defined success as a minimum requirement – the player logging at least 100-games at the NHL-level. You can play around with other metrics (like, say, points or TOI) and find similar results. 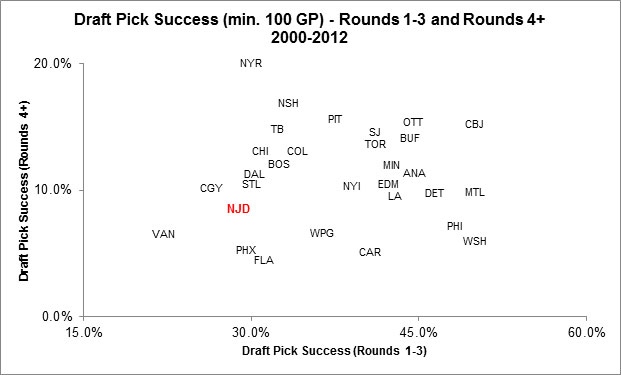 Teams like Columbus, Ottawa, Buffalo, San Jose, and Toronto – yes, Toronto – have done pretty well on both fronts. Teams like Philadelphia and Washington have really relied on top-end talent panning out, whereas teams like New York and Nashville have had more success in the later rounds. (For reference, 38% is about the average success rate for rounds one through three here – 11.1% the average success rate for rounds four and above.)

New Jersey looks pretty bad here on both fronts, but it’s their relative struggles in the early rounds that have likely led to the current situation. Only two teams – Calgary and Vancouver – have had less success in rounds one through three. The Devils have managed to turn thirteen ‘early’ picks over the last twelve years into an NHLer – by contrast, both the Ducks and Capitals have 21 apiece.

It’s a bit less drastic rounds four and beyond, but the Devils are still underwater there, too.

The Devils may not be the league’s worst drafting team over the last twelve years, but they make a pretty convincing argument for a top-five spot. (As an aside, the most convincing part of this graph may be Vancouver’s pitiful showing – perhaps a story for another day!)

Again, not all of this can be attributed to Lou Lamoriello and/or David Conte, nor does it suggest that the pair and their respective scouting department were doing something fundamentally wrong.

It is, however, a curious data point in light of Toronto’s current mandate – to build everything over, to throw infinite resources into draft/development like only they can, to prepare the organization for legitimate competition a few years down the road. A few years down the road, 72-year old Lou Lamoriello may be long gone.

At the absolute minimum, if I’m Brendan Shanahan, and I’m trying to get a pulse for what my longtime friend can bring to the table, I’m asking what the Devils did in terms of leading up to the draft and in the years following each draft selection. Remediate that, and you might have a truly impressive leadership contingent that excels at every facet of the business.