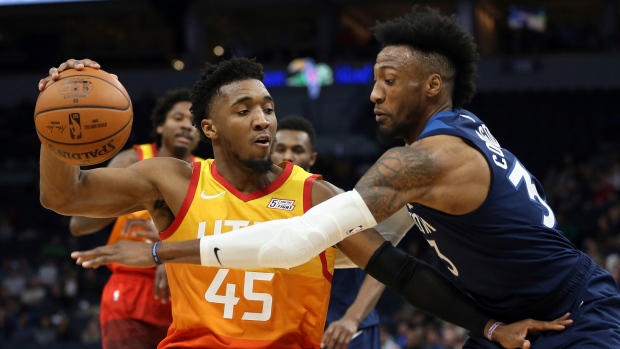 MINNEAPOLIS — With energy on defence and ample shot sharing on the other end, the Utah Jazz discovered the pick-me-up they needed in Minnesota.

The Timberwolves would be wise to take notes.

Donovan Mitchell had 30 points and six assists, Joe Ingles pitched in a season-high 23 points and the Jazz won 127-116 on Wednesday to stick the Timberwolves with their sixth straight loss.

Rudy Gobert added 20 points and 16 rebounds for the Jazz, who won for just the third time in their last nine games by taking over with a 38-24 advantage in the third quarter.

Jeff Teague scored 32 points, making all four of his 3-pointers and all six of his free throws, but the Timberwolves dropped their sixth consecutive home game and fell to 3-8 at Target Center this season. They're 7-6 on the road.

Andrew Wiggins had 26 points and Karl-Anthony Towns added 21 points and 11 rebounds for Minnesota, but the defence was problematic again, particularly between the paint and the perimeter.

“In the NBA season, there’s a number of different tough times, and this is one of them for us,” coach Ryan Saunders said.

“The coaching staff has done a great job of putting a system in place,” Towns said. “It’s more about discipline and execution.”

Utah has made its mark on defence under coach Quin Snyder, but that has fallen off lately in a stumble through the last three weeks. Five times in their last nine games, the Jazz allowed 120 or more points, which none of their opponents reached in their first 15 games. They're still eighth in the league in points allowed, but the lacklustre communication and decreased intensity has had Snyder concerned.

This was a better display, aside from the 36-point second quarter by the Wolves. The Jazz, who had separate spurts of 8-0 and 10-0 in the third quarter to break the game open, kept Towns from getting comfortable. Their ball movement on the other end was the ticket to success, with Jeff Green's corner 3-pointer with 1:58 left in the period a prime example that pushed their lead to double digits for the first time at 90-78.

“Ball movement, talking on defence, being able to get out in transition, and ‘Big Boy’ did his thing locking down Karl," Mitchell said, praising Gobert. "When you do that, it makes our life a lot easier.”

Georges Niang tossed in a couple of 3-pointers down the stretch, and the Wolves never gained any more steam. Utah was credited with assists on 15 of 24 second-half field goals. With the Jazz leading 117-102 midway through the fourth quarter, Towns was called for charging after knocking Mitchell over with an elbow to the forehead in the post to negate a basket.

“When we move the defence a little bit, it gives those guys a chance to attack in a better spot," Snyder said. "It was good to see Donovan cutting back and Joe as well being able to find people on the perimeter. I think we had more catch-and-shoot 3s tonight than we did in a while.”

With rookie Jarrett Culver recently cracking the starting lineup and Saunders preferring to use Wiggins as a primary handler, Teague has had to adjust to both coming off the bench and playing more off the ball.

Even if he's in the final year of his contract, in his 11th season in the league, Teague has proven his value beyond just experience, and leadership. He scored 15 points in the second quarter, finishing with a 3-pointer and a reverse layup in the final 32 seconds to forge a 59-all tie. After Mitchell's 3-pointer gave the Jazz a 47-40 lead that was their largest of the half, Teague answered with one of his own just 11 seconds later. He was fighting through a sore left ankle, too, that had him listed as questionable to play earlier in the day.

“He was aggressive, and he was keeping us in the game,” Saunders said.

Jazz: Guard Mike Conley missed his fourth straight game with left hamstring tightness, keeping Ingles in the starting lineup. ... Mitchell shot 8 for 11 from the floor in the first half.

Jazz: Host Golden State on Friday. They have beaten the Warriors twice already this season.