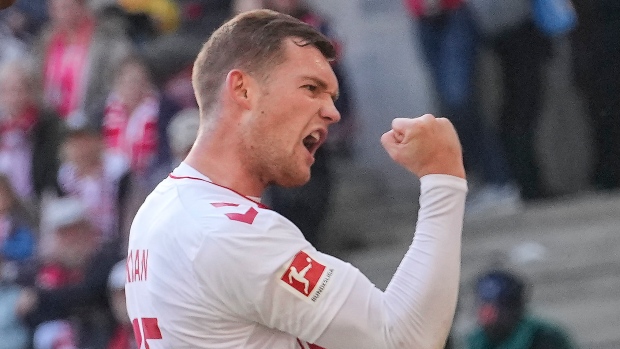 BERLIN (AP) — Borussia Dortmund failed to capitalize on Bundesliga leader Union Berlin’s first defeat when it conceded a one-goal lead and lost to Cologne 3-2 on Saturday.

Eintracht Frankfurt defeated Union 2-0 at home, ending the last unbeaten team’s record in the league, though Urs Fischer’s side remained top for the third round straight – on goal difference ahead of Freiburg.

Freiburg enjoyed a 2-1 win at home over Mainz to consolidate its great start after eight rounds.

Instead of going top, Dortmund dropped to fourth behind Bayern Munich, which ended its four-game winless run by routing Bayer Leverkusen 4-0 on Friday. With its main rivals all dropping points, Bayern cut the gap from five points to just two this weekend.

Jude Bellingham led Dortmund out as captain for the first time in the absence of Marco Reus and Mats Hummels. The 19-year-old England star became Dortmund’s youngest ever captain in the Bundesliga – and he celebrated with a hand in the opening goal.

Julian Brandt scored after a hard-fought opening half hour when he took Bellingham’s pass perfectly with his first touch and stayed cool to flick the ball past Marvin Schwäbe in the 31st.

But Dortmund again failed to push on – bringing thoughts back to Werder Bremen’s late comeback in the Bundesliga and Manchester City’s 2-1 win in the Champions League.

Florian Kainz equalized for Cologne in the 53rd, then sent in a corner for Steffen Tigges to score against his former team in the 56th. Dejan Ljubicic sealed it with a curling shot inside the far post in the 71st.

By the time the 17-year-old Tom Rothe’s cross looped in thanks to a kind deflection in the 78th, it was too late for the visitors.

Union paid the price for uncharacteristic lax defending in Frankfurt.

Mario Götze scored on a counterattack in the 12th for Frankfurt thanks to a good run from Randal Kolo Muani, who eased past two defenders before laying the ball back for the former Germany star’s second goal of the season.

Jesper Lindström robbed the ball from Paul Jaeckel, then cut inside him again before unleashing the ball inside the left post in the 42nd.

Götze went off injured in the 66th and Kolo Muani was sent off for his second yellow card two minutes later for coming down hard on Andras Schäfer’s ankle.

“We were good for the first 10 minutes, then it got less. Frankfurt produced the basics on the field in the way we actually envision. We didn’t get the basics, which characterize us usually, on the field,” Fischer said. “Frankfurt was more alert, quicker and sharper.”

Ramy Bensebaini scored a spectacular goal with his heel in Bremen. Unfortunately for Borussia Mönchengladbach, it was in the wrong goal and the fourth the visitors conceded in the first half of a 5-1 drubbing at promoted Werder Bremen.

Niclas Füllkrug scored twice and Marvin Ducksch got the other inside the first 13 minutes for Bremen before Bensebaini's attempted clearance went wrong in the 37th.

Marcus Thuram pulled one back in the 63rd for Gladbach but Mitchell Weiser ended any hopes of a comeback 10 minutes later.

Leipzig spoiled Thomas Letsch’s debut as Bochum coach by running up a 4-0 win, and Yannick Gerhardt scored in injury time to give Wolfsburg a 3-2 win over Stuttgart.