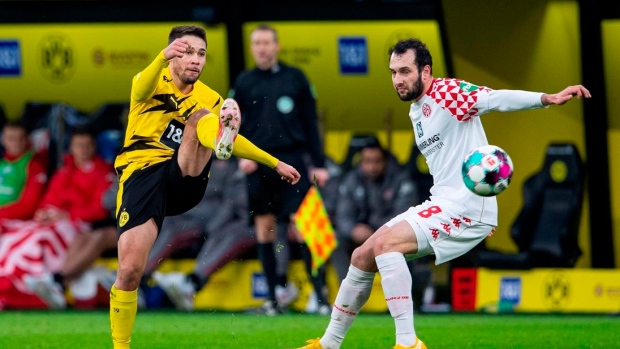 BERLIN — Borussia Dortmund captain Marco Reus missed a penalty in a 1-1 draw with lowly Mainz while Leipzig again missed the chance to move to the top of the Bundesliga on Saturday.

Leipzig, which was denied top spot in losing to Dortmund 3-1 last weekend, could manage only 2-2 at Wolfsburg and it remains a point behind league leader Bayern Munich. Bayern hosts Freiburg on Sunday.

Dortmund was looking for its fourth win in five league games under new coach Edin Terzic but was frustrated by a committed performance from Mainz in Bo Svensson’s second match in charge.

“I could have decided the game but I didn’t manage it,” said Reus, who said he would apologize to the team for his penalty miss.

The draw was enough for Mainz to move off the bottom on goal difference from Schalke, which visits Eintracht Frankfurt on Sunday.

“A step in the right direction,” Svensson said.

Dortmund got off to a fine start with Erling Haaland firing inside the left post in the second minute. But the goal was ruled out through VAR as Thomas Meunier was offside in the buildup.

Jude Bellingham struck the post toward the end of the half and it was as close as Dortmund came to scoring before the break.

Mainz defended doggedly and took its chance in the 57th when Levin Öztunali eluded Mats Hummels with a back-heel trick and let fly from 20 metres inside the top right corner.

The visitors almost grabbed another shortly afterward when Alexander Hack struck the crossbar with a header.

The 16-year-old Youssoufa Moukoko had just gone on for Dortmund and he played a decisive role for his side’s equalizer in the 73rd, keeping the ball in play before sending in a cross that was cleared by Mainz defender Phillipp Mwene – only as far as Meunier, who fired back in to equalize.

Meunier was then fouled in the penalty area by Hack, giving Reus a chance to score from the spot. The Dortmund captain sent his kick outside of the left post.

It could have been worse for Dortmund as Mainz captain Danny Latza hit the post late on. Terzic’s team remained fourth, four points behind Bayern, which has a game in hand.

Promoted Stuttgart has been enjoying an impressive return to the Bundesliga with wins over Dortmund, Hertha, Mainz, Bremen and Augsburg. But Pellegrino Matarazzo’s side has been unable to win any games at home.

Stuttgart’s wait continued after drawing with Borussia Mönchengladbach 2-2, though it felt like a home win when Silas Wamangituka scored a penalty to equalize with the last kick of the game.

Gladbach looked primed to win until Ramy Bensebaini was ruled to have hauled down Sasa Kalajdzic in injury time. The penalty was awarded after a VAR check, allowing Wamangituka to equalize.