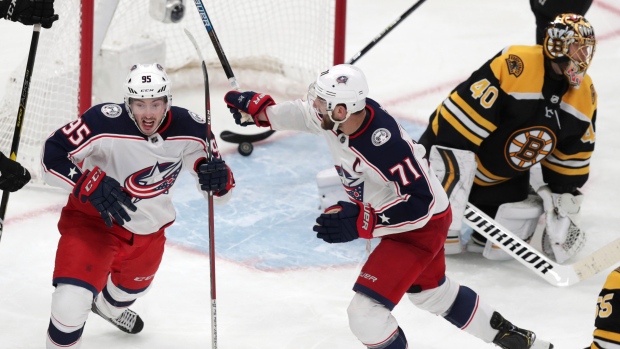 BOSTON — For Matt Duchene, nearly every spring was like Groundhog Day at his cottage in Haliburton, Ont.

He had more than 700 NHL regular season games under his belt, but just eight Stanley Cup playoff contests over 10 seasons. He never even sniffed the second round before arriving in Columbus.

Most years, Duchene would tune out the playoffs on TV, avoid hockey and focus on fishing. Last year, he changed it up.

“I had a lot of years I didn’t watch anything, but I watched every single playoff game last year. Every. Single. Game,” Duchene said. “I wanted to get as much of a taste for it as I could without being there.”

The only constant was the Stanley Cup clincher. No matter what, Duchene said, he would tune in on the night a team had a chance to hoist the Cup.

Once the Final ended, Duchene would get a photo printed of the winning team’s captain with Lord Stanley’s chalice over his head - and post it on the wall in the gym in his cottage. It was a conspicuous reminder of the ultimate goal, incentive for the sweat.

Fast forward to the wee hours of Sunday morning at TD Garden.

The Blue Jackets, the best power play team in the postseason, were on the man-advantage for the second time in overtime. Squander this chance and there's no telling if you'll get another one. Seth Jones made a fantastic keep at the blue line. Then Artemi Panarin’s shot bounced off Tuukka Rask’s pads directly to Duchene in the slot.

He didn’t freeze. The moment wasn't too big for him, not after all of that dreaming.

Duchene calmly kicked the puck to his stick.

“I just tried to stay patient and see what was there,” Duchene said. “Rask opened up his five-hole. That was it.”

Duchene picked the perfect time to pop in his first career Stanley Cup overtime winner, evening up this Eastern Conference semifinal series at one game apiece with a 3-2 victory for Columbus in Double OT. He has seized the stage, racking up four goals for the Blue Jackets in just six playoff games this spring.

So, how did that compare to what he watched from afar for so long?

Duchene was yelling “yeahhhhhh!” so loud during the celebration that his face was as red as his Columbus Blue Jackets pants.

“This is something that I've dreamt about for a long time,” Duchene said. “It’s like the most stressful - in the best way possible - thing that I’ve ever been through. I’m an outgoing guy. I’m a talker. But there’s times I can’t talk.”

Duchene’s goal came at a pivotal moment in the series. One shot the other way, one fantastic save that Sergei Bobrovsky didn’t make, and the Blue Jackets would need a shovel to dig their way out of a two-nothing hole.

“We needed to win,” Brandon Dubinsky said. “It was crucial that we found a way to split the series.”

Now, you could make the argument that the Blue Jackets are in the driver’s seat. The Bruins have played nine games in 17 nights to open this marathon tournament. They’ve played 180 more minutes of hockey than Columbus, then were pushed to overtime twice - and Double OT in Game 2 for good measure to start this series.

That has to take its toll at some point.

“Are we probably a little fresher from the break? Yeah, we probably are,” Duchene said. “Our mentality in overtime was to keep pushing. We’re not going to sit back like a punching bag, play rope-a-dope and wait for them to run out of gas. We wanted to take it to them.”

Until Panarin’s shot found him in the slot, Duchene said he felt like he “had puck repellent on” because he was “chasing the puck around all night.”

In a way, Game 2 has encapsulated Duchene’s time in Columbus well. It hasn’t always been a seamless fit since the Feb. 22 trade from Ottawa. He and the team struggled after his arrival.

John Tortorella said Duchene has never been “a bad fit,” it was just poor timing that conspired, as the team limped to a 5-7-1 run immediately after his arrival. They settled in, won the games they needed to get in, then put it behind them and wiped the slate clean once the playoffs arrived.

“I think he just puts a tremendous amount of pressure on himself to be the best he can be to help this team win,” Tortorella said of Duchene.

The pressure is off now.

“I think he’s just having a lot of fun,” Blue Jackets captain Nick Foligno said. “He’s thriving on the big stage. That’s what you want.”

For Duchene, it’s been everything he’s imagined. Six wins down, he wants to have a say in what photo he’s posting in his gym this summer.

“We’ve got a long way to go, but I love playing for this team,” Duchene said. “I couldn’t be happier to be a Blue Jacket. I’m really excited to be here. This is something I’ve chased for a long time.”