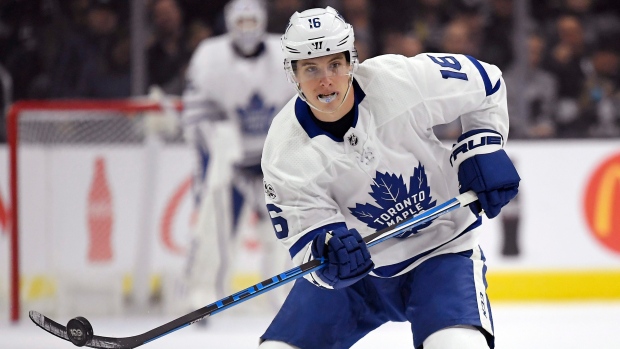 TSN Hockey Insider Darren Dreger said Monday that barring a change in his contract negotiations with the Toronto Maple Leafs, he believes Mitch Marner is planning to fly to Switzerland later this month to train with the Zurich Lions.

Dreger told First Up on TSN Radio 1050 Toronto that Marner and fellow restricted free agent Matthew Tkachuk may skate at the OHL's London Knights facility this week, but the Maple Leafs winger will likely head overseas if he's unsigned through next week.

"If Toronto and the Marner camp can't come to terms before the start of the regular season or training camp, and training camp as we know is looming this week, then he's got to decide, is he going over to Europe and he is going to continue to skate in Zurich, Switzerland?" Dreger said.

“Unless something changes, I believe his plan is to go to Switzerland in the 3rd week of this month” @DarrenDreger tells @heylandsberg and @dfeschuk the latest on Mitch Marner's contract negotiations with the Maple Leafs. ✈️🇨🇭@TSNHockey @TSN1050Radio pic.twitter.com/Q6NXPY11PB

The Lions confirmed in August that Marner's camp had reached out to the team about skating there should he remain unsigned.

Maple Leafs general manager Kyle Dubas said last week the team hasn’t explored trade options for Marner and said it was the team's “hope and our goal” to have him signed when the team opens training camp opens on Friday. The team endured a long standoff with restricted free agent William Nylander last season that extended to the Dec. 1 deadline to sign.

“I don’t think we want anybody to miss any day or training camp, period," Dubas told TSN Hockey Insider Bob McKenzie. "So we’ll continue to work towards that and remain hopeful. As I’ve said throughout, I’m optimistic about it and we lived through it last year. We saw the effect of a player who missed training camp, missed exhibition, missed the first two months of the season and it’s tough. It’s tough to expect that player is just going to jump back in and be at the level that we expect – especially at the pay that they’ve previously earned from their previous seasons. And then when that doesn’t work well, then criticism flows in and it makes it even tougher.

James Mirtle of The Athletic wrote last month that the Maple Leafs have offered Marner between just under $9 million to roughly $11 million per season on a potential new deal based on term and added that the team had discussed three, six and seven-year deals with Marner’s camp.

Marner is one of several high-profile restricted free agents who remain without a contract, including Brayden Point of the Tampa Bay Lightning, Colorado Avalanche winger Mikko Rantanen, Tkachuk of the Calgary Flames, Winnipeg Jets forwards Patrik Laine and Kyle Connor and Brock Boeser of the Vancouver Canucks.