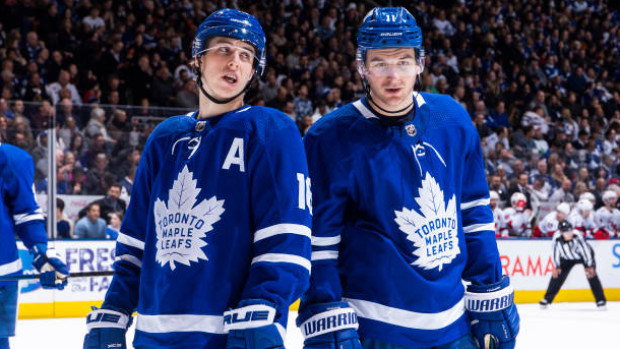 TORONTO – The NHL Trade Deadline came and went on Monday with little action from the Maple Leafs’ camp, save for a small deal that sent goaltender Michael Hutchinson to Colorado in exchange for defenceman Calle Rosen.

Toronto’s other moves of the day were purely minor league transactions: Swapping prospect Martins Dzierkals to Vegas for a fifth-round selection in the 2020 NHL Draft while retaining part of Robin Lehner’s salary to complete a three-team trade with Chicago, and dealing defenceman Jordan Schmaltz to the New York Islanders for forward Matt Lorito.

The Leafs rounded out Monday by announcing a four-year extension for defenceman Jake Muzzin, coming in with an average annual value of $5.625 million.

That limited activity was supplemented by a trade made earlier this month when the Leafs acquired goaltender Jack Campbell and forward Kyle Clifford from the Los Angeles Kings for forward Trevor Moore.

“The way that you operate on the deadline is a byproduct of a number of things,” said general manager Kyle Dubas on Monday. “Cap space being one function, performance of the team being another. And then, how different player injuries and their return to the lineup will impact the cap space in the remainder of the year and how we have to manage that. So I think the confluence of all three of those things led to just some depth moves.”

Toronto has been without defencemen Morgan Rielly (fractured foot) and Cody Ceci (ankle) for a number of weeks now, but both players skated on Monday morning and are expected to be back in the lineup by the end of March.

Meanwhile, the banged-up Leafs have been increasingly abysmal at times lately, losing three of their last four games by three-goal margins while showcasing some wildly inconsistent play. But as Toronto clings to a playoff spot as third seed in the Atlantic Division, Dubas remains confident the group he has now can turn things around over the final 19 regular-season games, and if they can’t, he’s willing to bear the brunt of what criticism is sure to follow.

Dubas touched on that and a number of other topics in his press conference with reporters late Monday afternoon.

I think the group is in a challenging spot. But with that comes the opportunity to do something special and something great. There are a lot of people that are writing the obituary for the team and putting the team into the ground. And that's fine, that's fair. When you play that way, that's what you get. But I know from that comes opportunity. You can go meekly into the night and just accept and build the excuses that you want for why it didn't work out the way that you wanted it to work out, or you fight your way back. And it's not to prove people wrong thing because I think the criticisms that are levied are largely fair. But it's a chance to show what your best self is. We show it in flashes, and we’ve been capable of it in really difficult games as we've shown in various difficult games during the year. But it's getting to that point now, when there's a large amount of doubt around the team – largely earned – that we can do something special as a group and really earn some of the experiences and the lessons that we want in the end, and that's what we're excited about now for sure.

[Our poor play] goes back beyond that. I don't think there's any reason to dance around it. We were in the lower part of the league when we made the coaching change [from Mike Babcock to Sheldon Keefe on November 20] and then we had a great run there through the beginning of January and, since then, we've been a little bit uneven. So it’s easy to look at the recent [struggles], but I think the reality is you take it all in its totality rather than react to one or two games. I think we’ve shown enough throughout our run since Sheldon's been at the helm that gives you a great sense of optimism. And then we also have some games where we rightfully draw the doubts of a lot of people. The best way to put it is like a Jekyll and Hyde type of [thing], and I think it's up to our entire program, starting with me and onto Sheldon and onto the players, to find our way out of it and be the best version of ourselves.

I think Saturday night was an embarrassing night, not because our team lost the game and the goaltender of record for the team was the Zamboni driver from Mattamy Events Center. It was embarrassing because of the way we played that put us into the position where we were down to [Carolina] 4-1 when we actually started generating shots on him.

At those moments, impatience and frustration certainly boils. No BS about that. But in the end, we've set ourselves up on a journey that going to be difficult. It's going to be hard. We're going to have moments like that where we question what we're doing, we question each other; we question ourselves. But you get up every day and you can switch your plan every single morning but then I think you'll get through this having changed your plan 100 times and look back and say, geez, we should have just stayed on the course we were at and it would have served us so much better in the end.

On why the Leafs still can’t, or won’t, show their best consistently as a team

Good question. The truthful answer is we don't know. That might draw some criticism to say I don't know but I'm not going to bull**** and tell you I have some magical solution. I think we have to go through this and we have to find our way to be our best on a daily basis. We show signs of what we can be. I think it's not really what people want to hear, but it's the truth that we have to keep at this every day. We can't waver when things don't go well. We have to keep marching towards the way that we want to go. We have to be more consistent with our focus, with our mindset, with our effort every single night to get to where we want to go. I know we have the character and the leaders on the team. Some of those guys are still young and they're finding their way as leaders within the group as well. We have to help them get there and in time we will.

On whether the Leafs came close to moving Tyson Barrie

There was nothing on the front burner. The reality is because of the way that things have gone, we started to get some interest in him, and because of the way things had gone I felt it was good practice at least to listen and start to envision what the return would look like from our end. But because we're in the position that we're in, and you acquired him [from Colorado last July 1] and he's played very well, especially since the coaching change, we were totally fine with him running it out and continuing to grow as a part of our group. We're excited to have him as part of it but we were under no rush because of where we're at or had any real impetus to have to do something with him.

We’re in an interesting situation, because as you saw today with Morgan and Cody back skating, it looks like they're going to be back well before the end of the year. How soon, we don't know yet and they're still a ways away, but that kind of complicates the amount that you can bring in without thinking about the dollars going out, so we didn't feel compelled to really act on any of the things that were out there. In the perfect world, your own guys develop and quell all the concerns that you have about the roster and that people on the outside may have about them as well, but we'll continue to be on the hunt for that [defenceman], and roll from there.