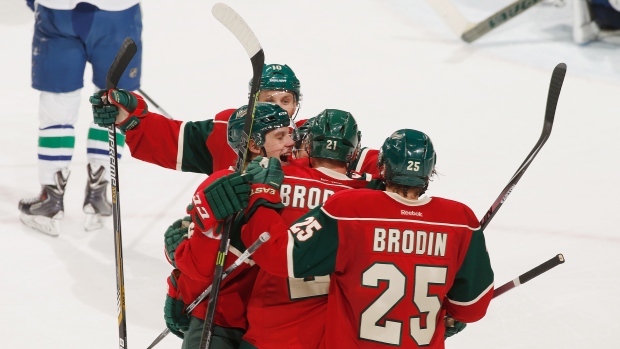 ST. PAUL, Minn. - The resurgence by the Minnesota Wild has been fueled by the brilliance of goalie Devan Dubnyk, a tightened defence and a boost of confidence.

For this win, they throttled up their attack.

Jason Pominville and Ryan Suter scored power-play goals, Dubnyk earned another victory in the net and the Wild beat the Vancouver Canucks 5-3 on Monday night for their sixth straight win in regulation.

"For sure, when you get goals and you get guys going and get rewarded, it's a good sign," said captain Mikko Koivu, who had three assists.

Coach Mike Yeo's assessment was more measured, despite an 8-1-1 record by the Wild in the last 10 games, all with Dubnyk in goal since his arrival in a trade. They moved within three points of the cut for the second wild card spot in the Western Conference, against which they are 17-10-4 with seven consecutive victories in a row.

Part of the coach's caution was surely rooted in the status of forwards Ryan Carter and Jason Zucker, who sustained upper-body injuries in the first period and didn't return. Yeo said they won't be back "in the near future."

Jordan Schroeder got his first goal with the Wild, against the team that drafted him, and Nino Niederreiter and Kyle Brodziak also scored to send Canucks goalie Ryan Miller to an early exit midway through the second period.

Zack Kassian, Shawn Matthias and Ryan Stanton scored goals and Dan Hamhuis had two assists for the Canucks, who brought the third-best penalty kill in the NHL, including the most effective on the road. The Wild sliced that unit up with goals by Pominville and Suter.

Pominville snagged a cross-slot pass by Thomas Vanek, one of several sharp setups by the Wild, to score on their former Buffalo teammate Miller to make it 2-0.

"He's one of the best in the game. I feel like he knows where I'm going to shoot before I even shoot, so it's nice to get a freebie by Thomas and be able to beat him," Pominville said.

Eddie Lack relieved Miller after Brodziak one-timed a pass from Jared Spurgeon for a 5-2 lead less than 8 minutes into the second period. Miller was coming off a 31-save shutout against Pittsburgh on Saturday night, one of Vancouver's most well-rounded performances in a while, but this was his fifth loss in seven starts. Miller stopped 13 shots.

"It's definitely not Millsy's fault. You have to give them credit sometimes too," Kassian said. "They move it around really well on the power play and don't hold onto it too long. They have some chemistry out there, and that's tough on the goalie and the killers."

Suter, who scored for the first time in 47 games he has played since the opener, hit Nick Bonino with a slap shot and then fired again from long range for a 4-2 lead after seeing Bonino hobbling into position.

The Canucks came out feisty in the first period, with Devan Dorsett dropping the gloves in a tussle with Brodziak and Luca Sbisa drawing a roughing penalty. Their fathers are with them on this road trip, and Yeo said the Wild expected a lot of energy from their long-time rival.

The Canucks fell behind 2-0 less than 8 minutes in and never recovered despite hitting a post with shots in each of the first two periods. They have lost five of eight.

"Our fight back was good," coach Willie Desjardins said. "We didn't get the results we wanted."

Dubnyk, who had shutouts in each of the first two games of this homestand, made 22 saves. He has stopped 221 of 235 shots he has faced with the Wild, now drawing a "Duuuuub!" serenade from the crowd nearly every time he makes even a mildly challenging save.

NOTES: The Wild have won six of their last seven games against the Canucks. ... Schroeder scored six goals in 56 games for the Canucks, who drafted the native of Lakeville, Minnesota, in the first round in 2009. ... The Wild scratched goalie Darcy Kuemper a day after recalling him from his conditioning assignment in the AHL, with Niklas Backstrom serving as Dubnyk's backup. Yeo said he wasn't sure yet who would start on Tuesday night at Winnipeg.