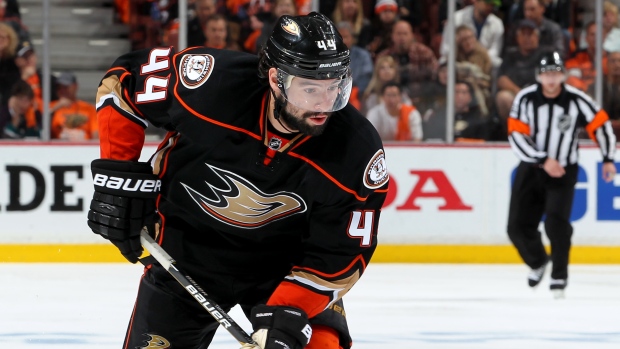 ANAHEIM, Calif. - Anaheim Ducks centre Nate Thompson will be out for five to six months after undergoing surgery to repair two labral tears in his left shoulder.

Thompson had surgery Thursday, and the Ducks announced the sobering results Friday.

Thompson will be sidelined well into next season after playing through a serious injury for the Pacific Division champion Ducks, who fell one game short of the Stanley Cup Final. Anaheim lost the Western Conference finals to the Chicago Blackhawks last month.

Thompson had two goals and four assists in 12 playoff games, averaging more than 15 minutes of ice time as the Ducks' third-line centre. He sat out Anaheim's first-round sweep of Winnipeg after apparently getting hurt in the regular-season finale at Arizona.

Anaheim acquired Thompson from the Tampa Bay Lightning last summer for two draft picks, and he settled into an important two-way role for a powerful club. He scored 18 points and had 39 penalty minutes in 80 regular-season games, with three game-winning goals among his five goals.

Thompson, who will turn 31 years old in October, is under contract for two more seasons with an annual salary cap hit of $1.6 million. The Alaska native played for Boston and the New York Islanders before 4 1/2 seasons with the Lightning.

His extended absence could lead to promotions for young Ducks centres Rickard Rakell and Chris Wagner. Anaheim also could look for a veteran centre in free agency.