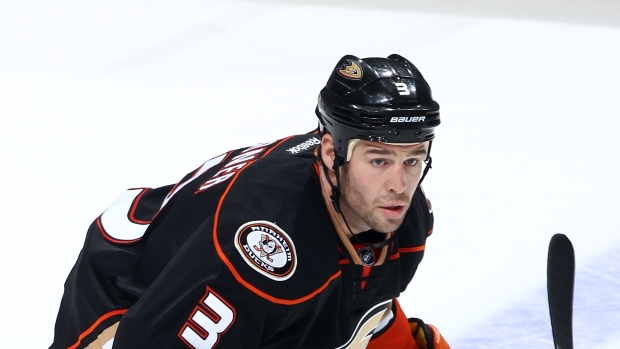 VANCOUVER - An NHL defenceman charged in connection with shooting a grizzly bear on British Columbia's central coast did not meet residency requirements for the provincial hunt, conservation officers say.

Clayton Stoner, 30, of the Anaheim Ducks, is accused of five offences, including two counts of knowingly making a false statement to obtain a hunting licence.

Court records show the statements were allegedly made in Stoner's hometown of Port McNeill in May 2013, when he played for the Minnesota Wild.

Stoner's primary residence had to be in B.C. in order to get a licence, she said. He was also required to be living in the province for six of the 12 months preceding the spring grizzly bear hunt.

"The application of the limited entry hunt, and the physical hunt and harvest of wildlife under these particular circumstances, was unlawful," Mann said in a statement Thursday.

Non-resident B.C. hunters have the opportunity to experience the "privilege" of hunting, but must use licensed B.C. guide outfitters, she said.

Stoner also faces separate counts of hunting out of season, hunting without a licence and unlawfully possessing dead wildlife related to the shooting near Bella Bella.

The hockey player has never denied the hunt, which sparked debate two years ago when pictures published in a Vancouver newspaper showed him holding the grizzly's severed head. He claimed at the time to have the necessary permits and licences.

The bear, which local residents had named Cheeky, was killed in an area known as the Great Bear Rainforest.

Jess Housty, a tribal councillor with the Heiltsuk Nation based in Bella Bella, said the charges against Stoner are "symbolically important.

"The message that I'm hearing from a lot people is justice is finally being served," she said, acknowledging Stoner has not been convicted. "The fact is, this is justice for one bear and not justice for all bears."

Housty screened a film in Vancouver in September 2013 featuring the graphic photos, which were taken by a Heiltsuk Nation field technician who confronted the man immediately after the kill.

"Our estuary guardians who were stationed in a high-traffic hunting area interacted with Clayton Stoner," she said Thursday. "(He) was boasting about the animal he'd killed and showing the paws and the head."

The Coastal First Nations had requested hunters respect a ban under tribal law on trophy killing in their traditional territories before the hunt.

Stoner defended his hunting trip with his father, an uncle and a friend after the photos were publicized.

"I grew up hunting and fishing in British Columbia and continue to enjoy spending time with my family outdoors," he said in a September 2013 statement, adding he would continue those activities in the province.

Conservation scientist Chris Darimont, from the University of Victoria, said Stoner would not have been apprehended without the Heiltsuk Nation's efforts.

"(But) the provincial government is going to gloat that this demonstrates that they have enforcement capability and this is a well-managed, scientific hunt," he said.

Darimont said the government is defending the annual hunt for political gain from hunting advocates.

Stoner's next court date is scheduled for Oct. 9 in Vancouver, three days before the Ducks meets the Vancouver Canucks in Anaheim.

Note to readers: This is a corrected story. A previous version incorrectly reported the name as Jason Stoner.