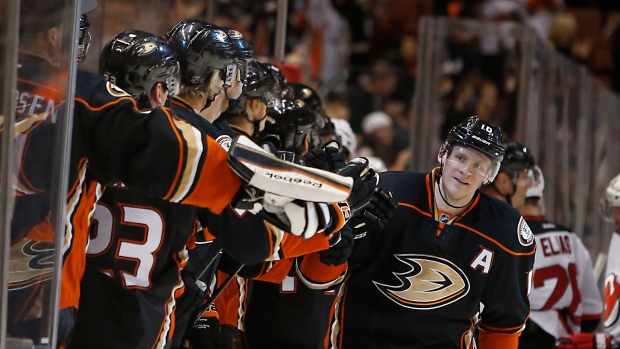 ANAHEIM, Calif. - Jacob Silfverberg ended a long drought with his first two goals in almost a month, and Patrick Maroon snapped an even longer one to help lead the Anaheim Ducks to their second straight decisive win after half a season of mostly narrow victories.

Hampus Lindholm and Silfverberg scored 1:52 apart early in the second period after New Jersey changed goalies due to Cory Schneider's injury, and Corey Perry got his team-high 19th goal in a 5-1 victory Friday night.

"Obviously, it's been a long time, and it felt good to get a couple tonight," said Silfverberg, who had gone 12 straight games without a goal. "I've been struggling a bit lately with getting off shots and getting good shots on the net. That's the strength I think I have in my game, and it's something I've been looking to get back to. Hopefully I can build off this and start scoring goals more frequently."

Silfverberg and Maroon completed the scoring in the final 3:33, helping the Ducks remain tied with Nashville atop the overall NHL standings following the Predators' 4-3 win over Washington. Maroon's goal snapped a 17-game drought since Dec. 3.

"When we play for 60 minutes and we all play together, it's a sense of what we can do," coach Bruce Boudreau said. "When we follow game plans and do the right things, we're a good hockey club. When we don't, we're just like any other club. There are chances for mistakes, and when you make them, usually they're in the back of your net."

Ilya Bryzgalov faced only 15 shots while earning his first victory in three starts since returning to the Ducks on Dec. 9 as a free agent. He was the backup to Jean-Sebastien Giguere during Anaheim's 2007 Stanley Cup championship season.

Playing their second straight game without Jaromir Jagr and Tuomo Ruutu, both of whom were back home with the flu, the Devils got their only goal from Martin Havlat.

Schneider stopped 14 of 15 shots, but was replaced by backup Keith Kincaid at the start of the second period. Kincaid gave up four goals on 25 shots — two of them in the first 5:08 of the period.

"I didn't have much time to get ready and I didn't feel very sharp there at the beginning of the second. But as a backup, you've got to be ready at all times and go in there and do whatever is called for," Kincaid said. "It's not how I wanted to start the second period, but I got a little more comfortable as the game went on."

Matt Beleskey stung Schneider high on the body with a hard, 40-foot snap shot about 20 seconds before Perry opened the scoring at 4:09 of the first. Schneider finished the period, and no X-rays were taken.

"He's feeling better right now, but he couldn't go back in," said Devils president and general manager Lou Lamoriello, who took over the head coaching duties after firing Peter DeBoer on Dec. 27.

"I thought Keith handled the situation as well as he could," Lamoriello added. "It's tough going in like that without any warmup or any shots, but it's part of the game. They just came right at us. They beat us to the puck and battled us to the puck the first two periods. They are where they are for a reason."

The Devils, coming off a 5-3 victory at Los Angeles on Wednesday, haven't won consecutive games on the same road trip since opening the season with wins at Philadelphia, Florida and Tampa Bay.

NOTES: Anaheim outshot the Devils 27-6 through the first two periods. ... Beleskey was a healthy scratch for Wednesday's 4-0 win over Toronto. ... Perry was coming off his eighth career hat trick Wednesday. ... C Patrik Elias is the only Devils player who has been with them since they beat Anaheim for their third Stanley Cup title in 2003. C Scott Gomez also played for New Jersey in the finals that year, then played with four other teams before rejoining Devils on Dec. 1. ... Devils D Andy Greene has played 46 games this season without scoring a goal, the most by any non-goalie who doesn't have one. His drought goes back 58 games to March 20, 2014, when he scored against Bryzgalov in overtime to give the Devils a 4-3 win over Minnesota. ... The Ducks completed a stretch of eight consecutive home games with a 5-3-0 record. They travel up the freeway Saturday night to face the Stanley Cup champion Kings.