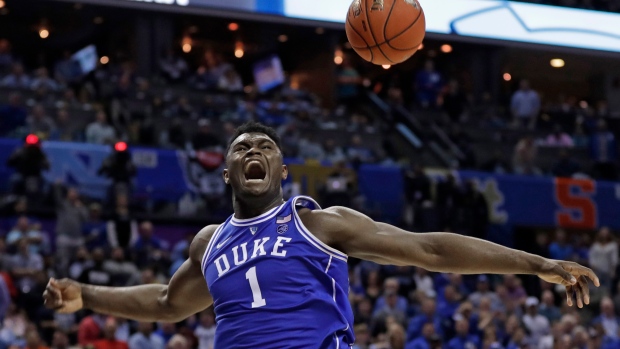 After the Selection Sunday dust settled, Duke, Virginia, North Carolina and Gonzaga all claim No. 1 seeds. Click here for the full bracket for the 2019 NCAA March Madness Tournament:

Zion's path to the Final Four goes through the nation's capital.

Zion Williamson and Duke are the overall No. 1 seed in the NCAA Tournament. The Blue Devils sit atop the East Region, and their road to Minneapolis could include matchups with ACC rival Virginia Tech -- which beat Duke without Zion -- and Big Ten champion Michigan State.

But with Williamson and fellow freshman R.J. Barrett on their games, it's worth wondering who will be able to keep up with the ACC Tournament champions.

"It's tough to determine what our potential is," coach Mike Krzyzewski said Saturday. "I just want to have us play as good as we possibly can play right now. ... I hope we're in this tournament for a long time -- that will make us even better."

Krzyzewski hopes centre Marques Bolden returns at some point in the tournament, which would give his team even more post depth to handle the likes of Michigan State if it came to that in the Elite Eight.

Duke opens the NCAA Tournament in Columbia, South Carolina, against the 16th-seeded winner of the First Four game between North Carolina Central and North Dakota State. A year after UMBC became the first No. 16 seed to upset a No. 1 seed when it beat Virginia, Krzyzewski knows not to overlook anyone.

"What I've learned along the way is not to be satisfied, not to rationalize," he said, "Because in these tough moments, rationalization can be the biggest opponent that you have at times."

Assuming Duke gets through the first round, eighth-seeded VCU or ninth-seeded UCF will be waiting. VCU star point guard Marcus Evans injured his left knee in the Atlantic 10 Tournament but is expected to return for the NCAA Tournament.

Virginia now has its chance to make up for being the first No. 1 seed to lose its NCAA Tournament opener.

The Cavaliers are the second overall No. 1 seed and back in the South Region bracket after losing to the University of Maryland-Baltimore County -- better known as UMBC -- a year ago. This is the seventh time Virginia has been a No. 1 seed and the fourth time in six seasons, though the Cavaliers still are looking to reach their first Final Four with coach Tony Bennett.

The Cavaliers (29-3) will play an NCAA Tournament newcomer in Gardner-Webb (23-11) of the Big South Conference on Friday in Columbia, South Carolina.

Virginia had been in the running to be the top overall seed until losing 69-59 to Florida State in the ACC Tournament semifinals. The Cavaliers find themselves in a bracket with Tennessee, which had been hoping for a No. 1 seed, Wisconsin, Purdue and Cincinnati.

Gonzaga is the No. 1 seed in the NCAA Tournament West Region despite losing in the West Coast Conference tournament title game.

The top-ranked Bulldogs will open against the First Four winner between Farleigh Dickinson and Prairie View A&M in Salt Lake City on Thursday.

Michigan was the No. 2 seed and will face Montana in Des Moines, Iowa.

Big 12 regular-season champion Texas Tech was the No. 3 seed and Florida State earned a No. 4 in one of the bracket's toughest regions.

North Carolina was rewarded for navigating a brutal schedule, earning the No. 1 seed in the Midwest Region after it tied Virginia for the regular-season ACC title and took Duke down to the wire in its conference tournament.

That's just about its only reward.

The Blue Devils earned the overall No. 1 seed and were given the more preferable East Region, and that means the Tar Heels will be travelling all over the country in the NCAA Tournament. They'll open against MAAC tournament champion Iona on Friday in Columbus, Ohio, and could face eighth-seeded Utah State or ninth-seeded Washington for a spot in the Sweet 16.

Which happens to be in Kansas City, Missouri, just down the road from where Roy Williams once coached Kansas. And who should be the No. 4 seed but the Jayhawks, who could earn another trip to the Sprint Center -- where they just lost the Big 12 Tournament final -- with a pair of wins.

The Jayhawks open against Northeastern in Salt Lake City, and then would face the winner of a tough showdown between SEC Tournament champion Auburn and No. 12 seed New Mexico State.

The bottom half of the Midwest Region boasts just as much intrigue.

Just as much college basketball pedigree, too.

Kentucky spent much of the season in the discussion for a No. 1 seed, particularly after a win over then-No. 1 Tennessee during conference play. But a narrow loss to the Vols in the SEC Tournament may have dropped the Wildcats a line and into a matchup with Abilene Christian.

If they advance, they would have to face seventh-seeded Wofford -- the Southern Conference champ and mid-major darling, currently on a 20-game win streak -- or Seton Hall, a team that already topped Kentucky once this season and knocked off Marquette twice and Villanova once.

Third-seeded Houston won a school-record 31 games along with its first regular-season conference championship since 1992. The Cougars, who will open against Sun Belt champion Georgia State, will be trying to advance to the Sweet 16 after losing to Michigan in the second round a year ago.

Iowa State packed the Sprint Center during the Big 12 Tournament, and it was that support -- even in the finals against nearby Kansas -- that helped propel the Cyclones to the championship. They figure to have even more support if they get past Ohio State in the first round and the Houston-Georgia State winner to reach the Sweet 16 for the first time in three years.