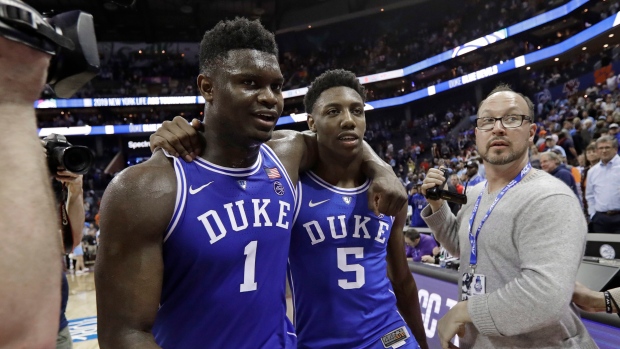 The NBA draft is like the college basketball season; it's all about Zion Williamson.

The Duke freshman was the biggest star the college game has seen in years with his breathtaking dunks and incomparable athleticism. Now he's him the unquestioned choice to go No. 1 in Thursday's NBA draft.

Here's a look at the top prospects:

The Associated Press national player of the year could be a franchise-changing talent.

STRENGTHS: The 6-foot-7, 285-pound Williamson blends size, strength and nimble moves in a rarely-seen package. Beyond the highlight-reel dunks, he was practically unstoppable in the open court and when he put the ball on the floor in the paint, both with a quick step to bypass defenders and the strength to overpower them. Williamson averaged 22.6 points and 8.9 rebounds while shooting 68%, and was a good — even dazzling at times — passer. He's also a willing defender who can cover a lot of ground, wrestle in the paint and protect the rim (1.8 blocks).

CONCERNS: Not much. The popular theory is to sag off considering he made just 33.8% from 3-point range last season, though he was much better both after Jan. 1 (39.6 and in four NCAA Tournament games (7 of 17, 41.1%). He must improve at the line after making just 64% of his free throws.

STRENGTHS: The 6-foot-7, 202-pound Barrett led the Atlantic Coast Conference at 22.6 points to go with 7.6 rebounds and 4.3 assists. The lefty is a pro-ready scorer who can attack the paint, hit from midrange or step outside. Barrett was an AP first-team all-American with an ACC single-season freshman scoring record with 860 points — the second best total by any player in Duke history.

CONCERNS: Barrett must improve as a 3-point shooter (30.8 to fully stretch defences. He also shot 66.5% at the foul line, including a critical miss in the final seconds of the NCAA Elite Eight loss against Michigan State. And at times, Barrett's aggressiveness worked against him, such as when he had three shots blocked in the paint in the final minute of the loss to Gonzaga in the Maui Invitational championship game.

The versatile redshirt sophomore could go in the top five.

STRENGTHS: The 6-7, 225-pound Hunter was ACC defensive player of the year and the National Association of Basketball Coaches' national defensive player of the year with his inside-out ability. He isn't flashy but is a steady offensive presence (15.2 points, 52% shooting, 43.8% on 3s), including hitting the overtime-forcing 3 in Virginia's win against Texas Tech in the NCAA championship game. And if there's any question about Hunter's value, consider this: the Cavaliers won 66 of 71 games over two seasons with Hunter in the lineup and lost the only game without him (that shocker against 16-seed UMBC in the 2018 NCAA Tournament).

CONCERNS: Hunter had dominant stretches last season, but he's unselfish and can blend into the background when needing to be more assertive. He is still refining his overall offensive game.

— DARIUS BAZLEY, Syracuse: The 6-9 forward is tough to project after passing on a season at Syracuse, then reversing course on playing in the G League in favour of draft training. The former five-star recruit is a second-round prospect.

— SEKOU DOUMBOUYA: The 6-9, 230-pound forward is a lottery prospect with two-way potential and positional versatility. He played last season in France's top pro league and offers intriguing upside with his ability to run the floor and shooting touch, but he's only 18 and needs time to develop.

— RUI HACHIMURA, Gonzaga: The 6-8 junior has length and athleticism that could land him in the back half of the lottery. He averaged 19.7 points and 6.5 rebounds, though he'll need to improve his outside shot.

—CAMERON JOHNSON, North Carolina: The 6-8 graduate student is a first-round prospect offering immediate perimeter help with a soft stroke that had him ranked seventh nationally in 3-point percentage (.457).

— NASSIR LITTLE, North Carolina: The 6-6 freshman is another late-lottery prospect with impressive athleticism and physical tools (including a 7-1 wingspan). He flashed at times with an aggressive style and shows defensive potential, though he'll need to improve his outside shot and refine his feel for the game with experience.