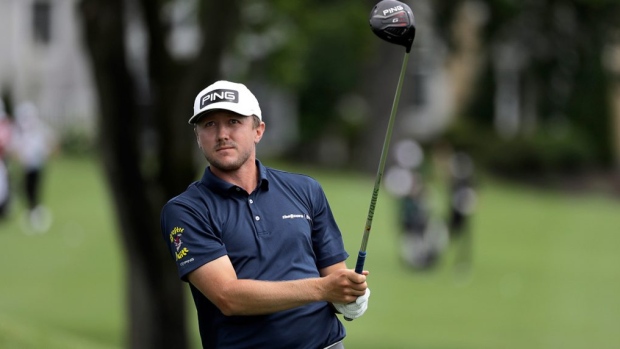 On the scorecard, the difference between shooting 60 and 59 is just one shot, but as every golfer knows, it’s much, much more than that.

Mackenzie Hughes came to his final hole during the first round of the Travelers Championship with a chance to become just the 12th player to post a sub-60 score on the PGA Tour. His putt from 40 feet slowed to a halt about four feet from the cup and he settled for 60.

While he didn’t join the exclusive club, Hughes still rolled out to a three-shot lead after his red-hot round that included a stretch of five straight birdies. It was also 18 shots better than his last competitive round played last Sunday at the RBC Heritage.

On Thursday Hughes started on the back nine in calm conditions, and got off to a relatively benign start, with one birdie over his first four holes. But he then began to find another gear, triggered by his putter.

He rolled in a 15-footer on 14 and followed that with four more including one from 30 feet on his ninth hole.

He added another birdie on his 11th hole of the day, which he said triggered his thoughts of 59. Three more putts dropped on his 15th, 16th and 17th holes, the last from just outside 30 feet, setting up the possibility for a magical round.

Unfortunately, his tee shot on the final hole found a nasty lie in the left rough and Hughes could only hack the ball out, leaving him a 40-footer for the magical round. The penultimate putt came up four feet short and he settled for a 60.

“I was really trying to make sure I just gave it a chance and rolled it past the hole,” said Hughes of the putt for 59, “and I don't know, just didn't hit it, and the line was perfect, but yeah, still super excited about shooting 60, and it's a round that I'll remember for a long time.”

If there were any consolation, 59 wouldn’t have equaled the tournament record. In 2016, Jim Furyk shot a 58, still the lowest round in PGA Tour history.
For Hughes, it was his career-best score on the tour. He carded rounds of 61 twice before, including one in his lone PGA Tour victory at the 2017 RSM Classic. This round, however, came at a perfect time.

Hughes has missed 10 cuts in 14 starts so far this season, but seemed to come out of his funk at the Honda Classic in March when weekend rounds of 66-66 gave him a second-place finish.

Those two rounds ignited his confidence, but a week later the tour shut down over the coronavirus pandemic.

“That was very important,” admitted the Kent State grad of his runner-up finish ahead of the shutdown. “Going into what we didn't even know was going to be a three-month break was huge for psyche, mental outlook on the game, just knowing I had that in my back pocket as I sat at home for a few months. Huge, huge boost for me.”

His play during the pandemic pause didn’t seem to let up. While playing a casual round with friends at his home course in Charlotte, N.C., Hughes had a putt on the final hole for 59. That one didn’t drop either. It was one of the four or five times in his life, he said, that he’s flirted with a sub-60 round. The wait continues.

Hughes’s round is brilliant by any measure but still just one of four. He knows that to be in contention on the weekend, he’ll need three more good ones.

“Really the mentality tomorrow is to go out there and make a bunch of birdies again,” he admitted. “The golf course is kind of yielding some scores, and in order to be there on Sunday, I'll have to keep making birdies.”