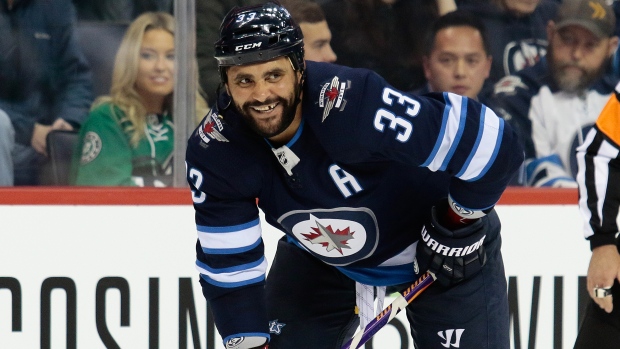 Dustin Byfuglien’s divorce from the Winnipeg Jets was a long and meandering process, one that included tense moments, a formal grievance – and yes, even a squabble over money.

But when it was finalized on Friday, GM Kevin Cheveldayoff said he knew how he was going to remember Big Buff’s time with the Winnipeg Jets.

"To me, the legacy is always going to be him grabbing two people out of a pile and throwin’ ‘em around," Cheveldayoff said, recalling Byfuglien ragdolling Vegas’ Colin Miller and Tomas Nosek at the same time during the 2018 Western Conference final.

But legacies are complicated and messy. They are usually muddled with too many moments to be just one thing, pure and clear.

That same is true with Byfuglien, even for the most popular player of the Winnipeg Jets 2.0. The everyman NHLer – who enjoyed ice fishing with a 24-pack of beer as much as he enjoyed blasting 20 goals from the blueline – agreed to mutually terminate his contract with the Jets on Friday.

Byfuglien dropped his grievance and officially walked away from the $14 million that was owed to him over this season and next. He is now an unrestricted free agent, free to sign with any of the 30 other teams that might try to coax the game-breaker back into the rink next season on a special over-35, bonus-laden contract.

It all happened in a way that some say only could with Byfuglien, just ‘Buff being Buff,’ the same guy who played a style that Cheveldayoff said was both "high risk and high reward."

"Dustin played the game and a lot of times played it on his own terms," Cheveldayoff said Friday in a conference call with reporters. "In this situation here, he did things on his own terms again."

Byfuglien has not spoken to reporters since last season. There has been no insight into his thinking, why a 6-foot-5 behemoth who bullied with brute force would suddenly walk away in the prime of his career – let alone with so much guaranteed money on the table.

When he last appeared, Byfuglien led the Jets with eight points in six games in their first-round loss to the St. Louis Blues. He averaged a team-high 25:41 with what we now know was a busted ankle.

It’s the timing, what Byfuglien didn’t say and when, that has complicated his legacy. If he told Cheveldayoff even eight weeks after the season ended, before the NHL Draft, that he was contemplating retirement, the Jets might not have lost Tyler Myers and/or Ben Chiarot.

Cheveldayoff confirmed Friday that Byfuglien waited until the eve of training camp to have that conversation. The Jets were blindsided along with the rest of the hockey world.

"It was a very emotional time," Cheveldayoff said. "It was tough on him to even come and talk to me. At that time, I asked him if he wanted a trade and he said ‘no’ - it had nothing to do with a trade. He just didn’t know if he had it in him to continue playing."

Regardless of his emotion, fans in Winnipeg – and maybe even some in the Jets' organization – viewed his decision as selfish. It left the Jets in a lurch. After saying goodbye to Jacob Trouba, Myers and Chiarot in the summer, Byfuglien was going to be counted on more than ever – and waiting until the last possible moment before the season left Cheveldayoff with no notice to replace him.

Byfuglien’s decision to then undergo surgery on that ankle, without consultation from the Jets, and file a grievance with the NHL Players’ Association further handcuffed the Jets’ season.

If there was no waytoadequately fill the gaping hole left by No. 33, it was literally impossible then since the Jets had to set aside his $7.5 million cap hit in case he decided to return or won the grievance.

Cheveldayoff said he doesn’t ask himself "coulda-woulda-shoulda" questions. Byfuglien could have crippled the Jets’ season, but they hit the pause of the NHL season in a playoff spot, winners of four straight and leaving coach Paul Maurice thinking this "could be the year" since they were hot at the right time.

"You can sit there and say you would have done this or done that, but at the end of the day, everybody’s got a choice," Cheveldayoff said. "And Dustin'schoice was to be true to himself and not put himself and maybe the team and everybody in a difficult situation.

"I would say that,to me, Dustin showed his integrity in the sense that he didn’t have it in him. He wasn’t just going to go through the motions and go out there and not be the player that he wanted to be emotionally."

That’s the other thing about legacies. They usually get better over time, because the bitterness of a breakup fades and the sweetness of Byfuglien shimmying along the blueline after a big blast becomes the lasting taste.

"This was never our desired outcome or ending with Dustin," Cheveldayoff said. "If it were the Jets writing the perfect script, it would’ve ended with Dustin holding a great, big silver trophy over his head at centre ice and flashing that great, big smile of his."

It’s a smile that we might not see again. There may never be another Big Buff, the freak and force of nature who transitioned from forward to defence with ease, and marched in and out of the NHL to the beat of his own drum.

"There’s only one person, and one person only, who can answer if he’ll ever play again – and that’s Dustin," Cheveldayoff said. "We wish him well and I look forward to the day when he comes back into the arena and [we] have a great night for him."