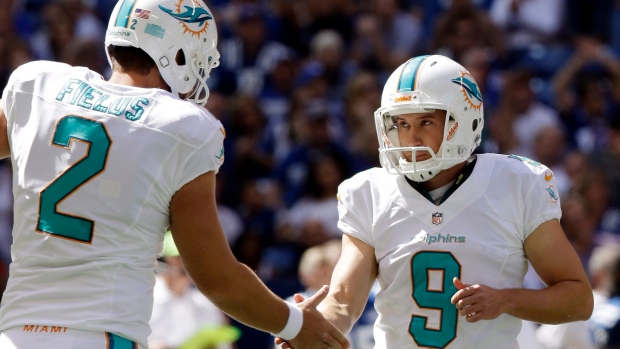 PHILADELPHIA - The Philadelphia Eagles lost another Pro Bowl player and another starter.

Kicker Cody Parkey went on injured reserve on Tuesday, ending his season. The Eagles (1-2) signed Caleb Sturgis to replace Parkey, who hurt his groin in warmups before Sunday's 24-17 win at the Jets.

Right guard Andrew Gardner also went on IR because of a foot injury. Offensive lineman Julian Vandervelde was signed to take his roster spot. Matt Tobin will likely replace him in the starting lineup.

The Eagles were missing three defensive starters in Week 3. Defensive tackle Cedric Thornton (hand) and linebackers Kiko Alonso (knee) and Mychal Kendricks (hamstring) didn't play. Thornton and Kendricks haven't been ruled out for Sunday's game at Washington (1-2). Alonso is having a second opinion on his surgically repaired knee.

Parkey missed a 44-yard field goal attempt late in the fourth quarter in a 26-24 loss at Atlanta in the season opener. He made his three other field-goal tries and all seven extra-point attempts. An MRI revealed he tore muscles in his groin, but he kicked through the pain.

Sturgis was released by Miami earlier this month after two seasons. A fifth-round pick in 2013, Sturgis is 55 for 71 on field-goal tries. His 77.5 per cent rate was fourth-worst in the NFL over the past two seasons. Sturgis is 14 for 20 from 40-49 yards and only 6 for 13 from beyond 50. He was 74 for 74 on extra-point kicks, but the NFL moved the conversion back to the 15-yard line this season.

Parkey was acquired from Indianapolis during training camp in 2014 and quickly took the job from Alex Henery. He set an NFL rookie scoring record and franchise record with 150 points. Parkey made 32 of 36 field goals, including all four beyond 50 yards.

His career field-goal rate (87.5 per cent) is third-best in NFL history among kickers with at least 40 attempts.

Parkey was bothered by a groin problem in training camp, but coach Chip Kelly said this was a new injury.

Parkey is the fourth Eagles player selected for last year's Pro Bowl who isn't playing for the team. Running back LeSean McCoy was traded to Buffalo. Wide receiver Jeremy Maclin signed with Kansas City. Guard Evan Mathis was released and signed with Denver.

Gardner became a starter last year when the Eagles had several injuries on the offensive line. He replaced Todd Herremans, who was released in the off-season. Tobin replaced him against the Jets and Dennis Kelly could earn time at the position.