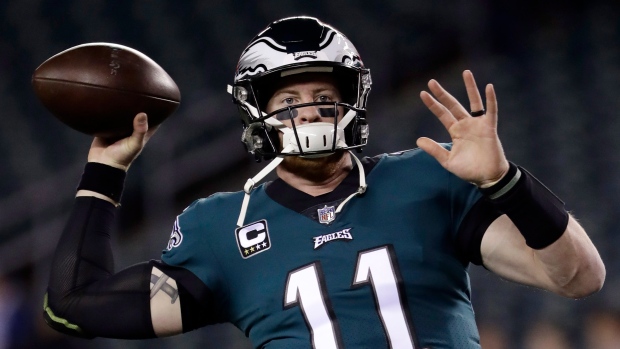 PHILADELPHIA — Carson Wentz's back injury will sideline him for Sunday's game at the Los Angeles Rams.

With the Eagles' No. 1 quarterback out, Nick Foles gets another opportunity to rescue the team he led to a Super Bowl victory last season.

The Eagles moved Wentz from doubtful to out on the injury list Saturday.

Eagles coach Doug Pederson said Friday that Wentz does not require surgery for a stress fracture in his back and the injury could take up to three months to heal. But Pederson wouldn't rule him out for the rest of this season. The Eagles (6-7) are still in the chase for a playoff spot.

There's no lack of confidence in Foles among the Eagles, of course.

"He's the guy and it's my job to create as much separation for him or if he gives me an opportunity and I am covered, go get it," wide receiver Nelson Agholor said after Friday's practice.

Foles hasn't taken a snap in a game since Week 2. He took over in Week 14 last season after Wentz tore two ligaments in his left knee during a comeback win on the road against the Rams. Foles led Philadelphia to its first NFL title since 1960 and started the first two games this season, going 1-1.

"Nick is a Super Bowl MVP quarterback for a reason and we've got a ton of confidence that he's going to give it his all like he always does," said tight end Zach Ertz, who caught the winning touchdown pass from Foles in Philadelphia's 41-33 win over New England in February.

Pederson is optimistic about Wentz's recovery.

"The fact that he doesn't need surgery on this is the best news you could possibly have on anybody that has a stress fracture or stress injury," Pederson said Friday.

The team isn't certain when Wentz got hurt and Pederson said the injury developed over time. A test on Tuesday revealed his condition.

"He's one of the toughest dudes I know, but of course it's going to affect him," wide receiver Jordan Matthews said after Thursday's practice. "You have to be able to twist, you have to be able to turn. Carson is probably the best quarterback also throwing off the run, so that affects your running, too. He's wearing a knee brace. This guy is playing through a lot."