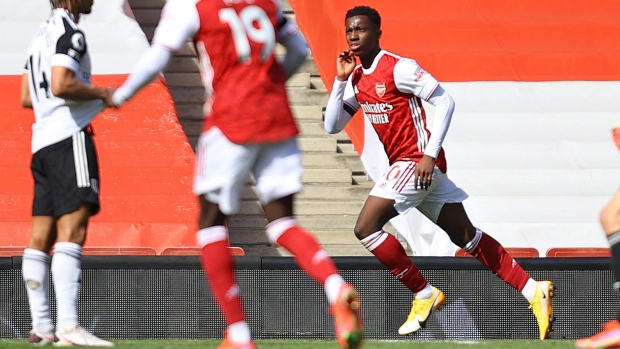 LONDON — Arsenal substitute Eddie Nketiah’s equalizer in the final moments crushed Fulham’s hopes of a big win and denied the team a huge boost as it tries to avoid relegation in a 1-1 draw on Sunday.

Nketiah scored in the seventh and final minute of added time, tapping in a rebound at the near post. Fulham’s players and managers couldn’t believe it since they only had to hang on for a few more seconds after going up 1-0 with a penalty in the 59th minute.

“We showed many times that we can play against the best and it is small things that means we don’t win the game," Fulham defender Joachim Andersen said. “It is just hard now.”

Andersen said "the way we defended was unbelievable. And then we concede a silly goal in the end.”

Fulham forward Josh Maja’s emphatic spot kick sent Arsenal's goalkeeper the wrong way and went into the roof of the net. It came after Mario Lemina was fouled by Arsenal defender Gabriel.

A Fulham victory would have given manager Scott Parker’s side real belief going into the last five matches of the season. His team remained in 18th place, with 27 points, as the London team tries to dig its way out of the drop zone.

But Parker isn't throwing in the towel just yet.

“This team has shown that we can win games and come up against big teams and get performances,” Parker said. “Of course there is belief.”

But the defeat left Parker "gutted,” coming more than a week after his team lost 1-0 in dramatic fashion to Wolverhampton in added time.

“We would’ve liked three points, but when I was called on I wanted to make an impact," Nketiah said. “I’m delighted to get a goal and salvage a point for the team.”

Nketiah had replaced Alexandre Lacazette in the 70th after the forward came off with a hamstring injury.

The substitute's goal came after a corner and the initial ball was headed on by Arsenal second-choice goalkeeper Mat Ryan, who was sent into the opposition's penalty area.

“He trains like a beast and he needed a game," Arsenal manager Mikel Arteta said before praising Ryan for his crucial flick at the end. “A great header.”

The visitors looked like they would hang on after the penalty, defending resolutely as Arsenal pressed forward for an equalizer. Fulham centre back Tosin Adarabioyo cleared Nicolas Pepe’s ball off the line in the 71st and goalkeeper Alphonse Areola palmed away a close-range shot from forward Gabriel Martinelli in the 90th.

The Gunners wasted their dominance in the opening stages of the match with Martinelli missing two early chances. The Brazilian had only the goalkeeper to beat in the second minute, but he lifted the ball over Areola and it went wide of the far post.

Martinelli missed again in the seventh, when midfielder Emile Smith Rowe cut to the byline and fed him the ball. The forward fired his shot on the spin, but he wasn’t able to generate power and Fulham was able to clear the ball.

The visitors gradually started winning balls off Arsenal and started pushing forward. Fulham manager Parker shouted out to Adarabioyo: “Keep looking for Cav on the top line,” urging him to get a long ball to forward Ivan Cavaleiro.

But the closest Fulham came in the first half was when Maja’s shot in the penalty area deflected off an Arsenal defender and squeezed just wide of the post in the 21st.

Arsenal thought it had finally scored just before halftime with some nice linkup play that was capped by a fine cross from right back Hector Bellerin and a powerful header from Dani Ceballos in the 40th. But the goal was disallowed after a VAR check showed that Bukayo Saka’s foot was just offside in the buildup.

Arteta thought his team had done enough and suggested it was harsh that Ceballos' goal was overturned.

“I think we deserved three points," he said. "We totally deserved to win the match.”